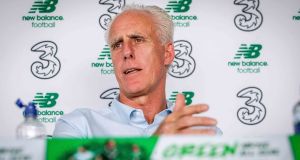 Mick McCarthy has issued a strong clarification that James McCarthy needs to re-establish himself as a first-team midfielder following his deadline day transfer to Crystal Palace through which he hopes to revive his club and international career career. The Republic of Ireland manager watched McCarthy feature in a 1-1 draw against Birmingham U-23s on Monday night but was nonplussed by the match.

“He needs some Premier League football in his legs. He did fine in that 23s game but I’d expect him to. There was no great intensity to it at all. I’ve been speaking to James by text and he’s just said: he needs games in his legs. He has had five games in two years, competitive games, so I’m told. He needs some now to be competing so he can get in the team.”

McCarthy was speaking in the Salthill Devon FC clubhouse in Galway on Friday evening. After speaking about his preliminary squad ahead of September’s critical qualifying game against Switzerland, McCarthy attended the official opening a of new all-weather facility developed by the club.

McCarthy has named the former Everton player in a squad for the first time but warned that even if McCarthy recovers his form under Rod Hodgson, it won’t guarantee an automatic elevation to the Republic of Ireland first team, referencing the fact that the quality of John Egan’s defensive displays for Sheffield won’t be causing him to change his central defensive pairing.

The inclusion of Troy Parrott, the 17-year-old Spurs player possibly on the brink of a first-team appearance because of Harry Kane’s ongoing injury problems and the unavailability of Heung-min Son, has provoked a degree of excitement which McCarthy was keen to put in perspective.

He refused to agree with the assertion that the young Dubliner is one of the most thrilling striking talents to emerge from Ireland in many years.

“Until I see him playing in real competitive games I am not going to tell you that. I can’t tell you that,” he said before conceding that he has admired Parrott’s qualities.

“I have, I have. But there is a big difference in that. He is not going to play, he is not going to be in my squad unless I have injuries or he plays for Spurs in the first team. If he plays in the next two games and rips it up, come and ask me again and I might be able to give you an answer to that. Until that time I can’t, and I won’t, give you an answer to that question.”

Although the need for regular goal-scoring threats has become urgent for Ireland, McCarthy emphasised that he needed to see proof of consistent performances rather than hand out risky caps. Michael Obafemi played with Southampton last weekend but McCarthy pointed out he needs to see more from the younger generation of Irish players.