Tottenham must learn to make a point in troublesome places 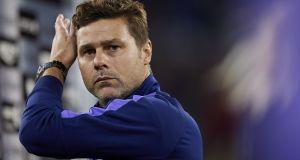 Mauricio Pochettino wants this to be a different season at the club, one that includes winning a first trophy since 2008. Photograph: Jose Breton/NurPhoto via Getty

It probably seems premature and unfair to apply some pressure on to Tottenham Hotspur after 90 minutes, especially when they came from behind to win their opening game against Aston Villa last Saturday.

But Spurs lost eight times away from home in the Premier League last season. That’s more than 40 per cent.

It probably seems premature and unfair to mention this, given they travel to Manchester City today.

But Spurs lost six in a row on the road at the end of last season.

While our attention was gripped by Champions League moments such as at Ajax, Mauricio Pochettino’s team were losing at Burnley and Bournemouth.

It is not premature or unfair to say that “different” and “challenging” are two keywords for Spurs 2019-20. They refer to what Tottenham need to be six and seven months from now. Pochettino’s team need to present a different, enhanced threat if they are to shape the outcome of the Premier League, if they are even to be challenging for the title itself.

The latter may sound like a rather grand ambition – Spurs finished 27 points behind City in May. But Pochettino and Tottenham today possess materials they did not have when they last won a league game outside north London – at Fulham in January.

All kinds of everything

Last season contained all kinds of everything for the club and there were three major issues to be addressed: the stadium, recruitment and winning away. The first two of those are resolved.

Pochettino no longer has to factor in where Spurs play and which of his injured players will be included. Tottenham have a new, impressive base, and a squad fit to fill it. In terms of selection it is about who Pochettino leaves out. Against Villa two of the new signings, Giovani Lo Celso and Ryan Sessegnon watched on from the stands alongside the dropped Jan Vertonghen and the injured Dele Alli, while Christian Eriksen did not go on until the 64th minute. At Fulham in January they had Kazaiah Sterling on the bench.

Those were single-goal defeats, all sustained in the last seven minutes. Chiselling out a couple of draws might not have scared City or Liverpool but the points would have lifted Spurs above Chelsea into third place in the final table. A gritty draw may have had other benefits, too, such as helping to create a culture of treasuring points from troublesome places.

Tottenham did not draw once away from home last season – they either won or lost. You need to go back to April 2018 to find the last away Premier League draw.

It would be mad to say the club’s management does not understand the value of making a point, but today would be a reasonable time to remind folk of their awareness.

Close to a draw

A trip to City will provoke memories of April’s Champions League drama but there was a 1-0 Tottenham defeat in the league three days later. Spurs were close to a draw that day and had they got one, Liverpool would be champions. (Possibly.)

Pochettino might have preferred a different start to this particular task of making his team harder to beat on the road – City is followed by the derby at Arsenal, then Leicester. But everyone has to be the author of their own change some time.

Pochettino himself has come around to the idea that silverware would be a good addition this season, even the League Cup. “My personal feeling is that starting my sixth season I need to lift a trophy,” he said.

“I don’t want to put pressure on the team or the club. But if you ask me personally, this season is not about finishing in the top four to be successful – although of course maybe that matters for the club. For me it is about winning some titles.”

Nicking a point off a “big six” rival is hardly a trophy but it would be a small statement that his squad is moving the right direction.

Much has been made of Spurs’ big six stats, and it is true, they do not read well. They have not won at Arsenal in the Premier League under Pochettino; when they last won at Anfield, Luka Modric scored; and they have won once at City in nine years, when Joe Hart was in goal.

Since then Spurs and the rest of the Premier League have been zapped by Pep Guardiola, then last season by Liverpool.

But there was a first Spurs win at Chelsea in 28 years two seasons ago and a 3-0 victory at Old Trafford this time last year. At Anfield there were draws in 2018 and 2016.

Those chipped-out points matter. Admittedly it’s not quite Danny Blanchflower, but there’s value in a draw.

Dean Smith, the Aston Villa manager, was magnanimous in defeat at Tottenham, saying the better side won. Villa, however, had two chances when 1-0 up to double their lead. Having encountered him post-match a couple of times, Smith’s team were a reflection of the sharp and smart 48-year-old.

Next Villa have Bournemouth. It is their first Premier League game at home since May 2016, when Villa were in the midst of a spiral of defeat and acrimony, scratching out just one point from their last 13 matches.

It was a season that began with Tim Sherwood in charge, followed briefly by Remi Garde. Aside from them, Kevin MacDonald and Eric Black were caretakers. The club was a mess.

As recently as February, when Villa lost 2-0 at home to West Brom, they were 10th in the Championship. But Smith then found a formula that led to promotion via the play-offs and the 40,000 for the West Brom match illustrated what Villa can be as a club.

It would, though, be as lazy as calling Villa “this season’s Fulham” to say that a big crowd equals competence.

Bournemouth will be a test. In Aston Villa’s absence, Eddie Howe’s team have taken up residence in the Premier League and there was a breathlessness to John McGinn when he mentioned the Premier League’s “intensity” after Tottenham.

Smith, however, will have noticed that Bournemouth drew only once away from home last season. And lost 13.