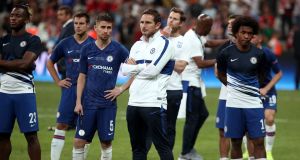 Frank Lampard and his Chelsea players after their penalty shootout defeat to Liverpool. Photograph: Nick Potts/PA

The first all-English Uefa Super Cup final served a dual purpose for Frank Lampard. Victory, he had considered beforehand, would not only etch another trophy into Chelsea’s history but instil in his young team the confidence that they can compete at Liverpool’s level this season. There would be no trophy, only more pain for Lampard in a Super Cup final, but his team left Istanbul in the knowledge they can and will compete.

After the misery of Old Trafford on Sunday and more distant memories of defeats as a player in the Super Cup games of 2012 and 2013 Lampard was desperate to launch his Chelsea reign with European silverware. But Liverpool write their own scripts in Istanbul and there was a sense of inevitability as Tammy Abraham stepped forward to take the final spot-kick of an otherwise flawless penalty shootout. Adrián, nine days into his Liverpool career, saved with his legs and the trophy was heading for Anfield. It will help Chelsea’s morale to dwell on their performance and not the outcome. They will be justified in doing so as it could so easily have been their name written on to this trophy.

Lampard is a manager in need of a break. His arrival has been complicated by a transfer ban, the loss of Eden Hazard plus an experienced central defender in David Luiz, and the injuries that impacted on his first Premier League contest. His resources still run deeper than most, however, and he was able to call quality of the calibre of N’Golo Kanté and the £58m Christian Pulisic into his starting lineup for the first time. Like a manager who basks in the impact of a substitute, Lampard could take immense satisfaction from the contribution of all three changes from Sunday’s team. The third, Olivier Giroud, led the line impressively and scored before making way for Abraham.

There was greater solidity and threat from the Europa League winners throughout, although a failure to capitalise on clear-cut chances remains a recurring problem. Abraham, Giroud and Kurt Zouma missed good openings while Liverpool’s replacement goalkeeper saved well from the England under-21 striker and fellow substitute Mason Mount.

The number of opportunities created against the team with the best defensive record in the Premier League last season was another reason for optimism at Stamford Bridge. As was the speed their new manager and his players learned and reacted to the punishing lessons of the Manchester United defeat.

Any hint of influence from José Mourinho would be dismissed by Lampard but his team selection followed the approach his former manager had advocated at Old Trafford. It was designed for winning the game and not for the future. Having taken issue with Mourinho’s doubts over Mount and Abraham after the 4-0 defeat the Chelsea manager dropped both to the bench as he opted for a more experienced attack. There was also a place for Kanté at the heart of a midfield that offered little protection against United, despite the France international sustaining an ankle injury during his brief substitute appearance.

Chelsea’s vulnerable back-line remained unchanged, however, and was entrusted to play their way beyond Liverpool’s press while being stretched by Klopp’s deployment of Mohamed Salah and Alex Oxlade-Chamberlain out wide. After an uncertain start the defensive unit repaid their manager’s faith. Giroud’s smartly taken finish from Pulisic’s through- ball was just reward for Chelsea’s more polished and threatening display before the break.

Kanté, Pulisic and Giroud combined for the breakthrough but their overall influence on the Chelsea performance was equally significant. Giroud brought a strength and quality to Chelsea’s hold-up play that Abraham did not at Old Trafford. Kanté was the dominant force of the first half, displaying not only his accepted defensive quality to nip the ball off the toes of James Milner and others but also attacking with a verve and intelligence that regularly unsettled the European champions. Pulisic started quietly on the left, feeling his way into his full competitive debut for the club he joined in January, but his creativity blossomed before the break. The former Borussia Dortmund player delivered a hugely encouraging debut that may, if his form is sustained, just reduce the number of questions Lampard has to face about the absence of Hazard this season.

Half-time came at a bad time for the team in blue. It gave Liverpool a welcome chance to regroup and to introduce Roberto Firmino, who created Mané’s equaliser within three minutes of his arrival and flourished in the pockets of space behind Chelsea’s midfield. With Mané now up against César Azpilicueta, Lampard’s side were once again suspect against the counter-attack, as at Old Trafford, but the confidence in their intricate passing through midfield did not waver.

Another contrast to Sunday’s defeat was the form of Kepa Arrizabalaga in goal. The world’s most expensive keeper reacted smartly to grab a deflected Henderson shot that was headed goalwards and produced an outstanding save to turn a Virgil van Dijk shot on to the bar at close range. He will know he should have done much better with the penalties from Divock Origi and Trent Alexander-Arnold in the shootout, however. The small margins are not going Chelsea’s way. Not yet, anyway. - Guardian