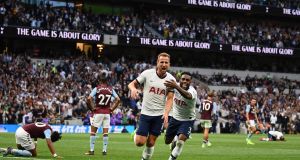 Harry Kane struck twice as Champions League finalists Tottenham opened their Premier League campaign with a win by coming from behind to beat promoted Aston Villa 3-1 at home.

Villa, back in the top flight after three seasons away, stunned the home faithful in the ninth minute when John McGinn scored with their first attack. It seemed Dean Smith’s side would mark their return with a notable victory as they hung on tenaciously until the 73rd minute.

Tottenham were laboured in a disappointing first half but were relentless after the break and record signing Tanguy Ndombele finally broke Villa’s resistance when he fired home from the edge of the area. Kane struck in the 86th minute after a mistake by Jack Grealish and the England captain rubbed salt into Villa’s wounds by stroking home his second in the 90th minute. It was cruel on a disciplined Villa side as

Elsewhere, Graham Potter made a winning start as Brighton manager as the Seagulls triumphed 3-0 at Watford.

The visitors went ahead after 28 minutes when Watford’s Abdoulaye Doucoure diverted a Pascal Gross cross into his own net and Florin Andone doubled the lead from close range after the hour.

Sheffield United veteran Billy Sharp struck a late equaliser as the promoted Blades snatched a 1-1 draw at Bournemouth on their top-flight return.

Chris Mepham bundled in the opener for the Cherries on 62 minutes after a Callum Wilson effort had been blocked.

United battled on and were rewarded when substitute Sharp poked home amid a goalmouth scramble late on, the goal being confirmed after a VAR check.

Burnley made a strong start as they overpowered Southampton 3-0 at Turf Moor thanks to a second-half Ashley Barnes double and a further effort from Johann Berg Gudmundsson.

Barnes rifled in the opener after 63 minutes and then volleyed in a second from an Erik Pieters cross seven minutes later. Gudmundsson curled in a fine third 15 minutes from the end.

Wilfried Zaha appeared as a second-half substitute as Crystal Palace were held to a goalless draw by 10-man Everton at Selhurst Park.

Palace star man Zaha was linked with the Toffees after handing in a transfer request earlier this week and he had to make do with a limited role after staying at the London club.

Glyfi Sigurdsson thought he had put Everton ahead early in the second half but Patrick Van Aanholt made a fine goalline clearance.

The Merseysiders had to hold on for the final 14 minutes after Morgan Schneiderlin was sent off for a second bookable offence.

Danny Welbeck’s spectacular overhead keeps Watford alive 20:36
Chelsea hold on to fourth but not without a scare at Palace 20:31
Clubs can now report prohibited county training directly to GAA 18:58
Women’s British Open to go ahead but without fans 17:16
UK Sport to investigate ‘deeply troubling’ allegations of abuse in gymnastics 18:04

1 Tipping Point: DeChambeau’s transformation raises questions, but who will ask them?
2 Tuilagi case shows England’s home-based clause is out of date
3 UK Sport to investigate ‘deeply troubling’ allegations of abuse in gymnastics
4 The unsolved mystery of Goran Ivanisevic’s stunning Wimbledon win
5 Cam Newton broke the mould: Can his flame be rekindled at the Patriots?
Real news has value SUBSCRIBE