Pat Devlin still seduced by the romance of the cup 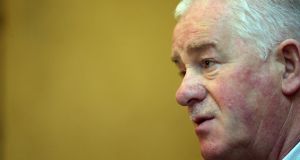 Pat Devlin: “To win the cup with Cabinteely . . . would put the club on the map. The cup is where the glamour is.” Photograph: Donall Farmer/Inpho

Pat Devlin will be looking to add to his store of celebrated FAI Cup memories in hoping to make a little bit of history for Cabinteely on the biggest night in the club’s five years in the League of Ireland tonight.

The First Division side host top tier strugglers Cork City, twice winners in having been in the final for the last four years, at Stradbrook.

As a player, Devlin scored the winning goal for non-league Dalkey United to put an experienced Limerick side out of the competition back in 1976.

In management, the now 66-year-old masterminded Bray Wanderers to winning the cup in 1990, before 29,000 in the first final staged at Lansdowne Road, and again in 1999.

Such is his endearment to the Blue Riband of Irish football that Devlin admits he’d take winning it with Cabinteely, unbeaten in nine games in the play-off places in the First Division, over gaining promotion.

“You look at us and our form and you look at Cork’s current form and it’s a fantastic draw for us,” said manager Devlin. “People ask me would you prefer promotion or to win the cup with Cabinteely.

“There is absolutely only one answer: to win the cup with Cabinteely as it would put the club on the map. The cup is where the glamour is.”

Devlin has defenders Conor Keeley and Jack Hudson back from suspension, though remains without Jack Watson and striker Marty Waters through injury as they seek to defend their record unbeaten run.

A hugely disappointing eighth in the Premier Division table, Cork will hope to salvage their season with a good run in the cup as they travel to the capital wary of the threat Cabinteely pose.

“It’s the most important game we have now, and we need to be ready for it,” said head coach, John Cotter, who remains without the injured Cian Murphy and Cian Bargary while striker Mark O’Sullivan needs to prove his fitness.

“They’re well organised, they’re fit, they have a threat in the lad [Rob] Manley up front who has scored a few goals for them.

“We need to be at it. The attitude needs to be right and we’ll go up there and take the game to them to try and get through.”

In the pick of the night’s other ties, First Division leaders Shelbourne travel to Dalymount Park to face Bohemians in an age-old Dublin derby.

“The pressure is on Bohs,” said Shelbourne manager, Ian Morris, who played for the Gypsies as recently as last season. “As soon as the draw was made, you felt as if it was bound to be the draw we’d get with a lot of players having played for either side along with myself and [assistant] Jason McGuinness.

“They’ll expect to win and we’ll set ourselves up to cause an upset.”