Caoimhin Kelleher in line for Premier League debut with Liverpool 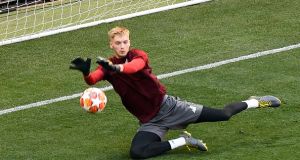 Liverpool’s Irish goalkeeper Caoimhin Kelleher warming up at the Wanda Metropolitano Stadium in Madrid ahead of the Champions League final. Photograph: Getty Images

Liverpool goalkeeper Adrian is a doubt for Saturday’s Premier League trip to Southampton after suffering a freak ankle injury during the Super Cup victory over Chelsea.

Reds boss Jurgen Klopp revealed the Spaniard was hurt when a pitch invader landed on his ankle during the post-match celebrations in Istanbul.

It was Adrian’s save from Tammy Abraham in a penalty shootout which secured the continental trophy for Liverpool.

The 32-year-old Spaniard was starting his first game for the European champions, days after signing for the club on a free transfer.

First choice goalkeeper Alisson Becker is already sidelined with a torn calf muscle, and the double blow may provide young Irish goalkeeper Caoimhin Kelleher with an opportunity to make his Premier League debut.

“Caiomhin is a boy we are all excited about,” explained the Liverpool manager. “He’s now in training, but not 100 per cent yet. He has to be in training today, then we will see.”

The 20-year-old is returning from a wrist problem sustained during pre-season.

“A supporter slipped and kicked his ankle,” said Klopp on Adrian. “Yesterday it was swollen and today I spoke to him and he said it’s much better, but we have to see.”

“It would help him a lot if it would be 100 per cent clear he can play tomorrow. A supporter jumped over something, was chased by some security guys, slipped and kicked his ankle. It’s crazy. Apart from that it was a brilliant night for him, not only because of the penalty but also because of the game.”

Alisson’s injury prompted Liverpool to sign veteran Andy Lonergan on a short-term contract. The former Preston, Leeds and Bolton goalkeeper trained with the Merseysiders over the summer due to a shortage of shot-stoppers. Asked whether Lonergan would be ready to deputise, Klopp responded: “Yeah. (Caoimhin) Kelleher is now in training as well, so we have them. If we have to make a decision, we have to make a decision.

“Adrian came in a week before, Andy Lonergan trained longer with us, played half-time in one of the pre-season games.”