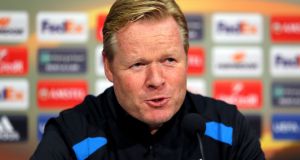 Ronald Koeman is keeping an eye on James McCarthy’s call-up to the Republic of Ireland squad and has reminded his injured midfielder – yet to appear for his club this season – that he expects all his players to put Everton first if there is a question over fitness.

“What I expect from every Everton player is not to take risks when it is not necessary,” the Everton manager said. McCarthy is recovering from a knee injury and is just coming back to full training, so there was a degree of surprise at Martin O’Neill’s decision to bring him into the Irish squad for forthcoming World Cup qualifiers against Moldova and Wales.

“Every nation is free to call up any player, if they want to see James then he needs to go because that is a Fifa rule,” Koeman said. “But James has not played a game since July, and that is important. I hope that is taken into consideration and I know that the two medical staff, at this club and with Ireland, are talking to each other about the situation.

“As long as there is understanding and good communication that is all we can ask. You sometimes can make exceptions for playoff games or matches that come at the end of the season, but we pay all the players’ salaries and we expect them to put the club’s interests first.”

1 Gerry Thornley: Saracens very late to apologise for repeated cheating
2 As the UK tightens gambling laws Ireland still lags way behind
3 Champions Cup final: How to get there, how to get tickets and more
4 Felix Jones expects De Allende and Snyman to boost Munster
5 Ken Early: Solskjaer’s short-term gambles proving very costly for United
Real news has value SUBSCRIBE
Crossword Get access to over 6,000 interactive crosswords