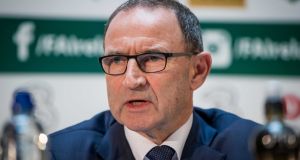 Martin O’Neill’s latest squad announcement involved a busier than usual game of “good news, bad news”, with the manager announcing that a couple of strikers he believes might one day become “proper goalscorers” for their country have been drafted in for the games on October 6th and 9th against Moldova and Wales, while revealing that one who has bagged a few big goals already is set to miss both games due to a knee injury.

The manager suggested that Jon Walters, who was something of a talisman for Ireland in the Euro2016 qualifying campaign, might well miss the play-offs as well as October’s games, although clearly that is not something either man has to worry too much about at this point in time.

Whether O’Neill can rustle up the required firepower against Moldova and Wales to give Ireland a decent shot at a place in the knockout games is the more immediate concern.

Shane Long remains a likely enough, although Daryl Murphy is comfortably the most prolific of the Irish strikers in England at the minute, with five goals in 10 appearances for Nottingham Forest since the summer.

Scott Hogan and Aiden O’Brien were added to the mix for the first time by the manager yesterday, although neither has shown the sort of form just recently to suggest they can be relied upon to make an immediate impact. The pair both inhabit roughly the same ballpark as Sean Maguire, whose two in nine for Preston would presumably not generate quite so much favourable comment were it not for his recent history with Cork and the less than overwhelming cases to be made for the new boys on the block.

“It’s a big ask for players to step in for their first game in such an important match,” acknowledged O’Neill as he lamented the loss of Walters, “but it might be the case of needs must.”

O’Neill, who had previously noted the form in recent weeks of Murphy and David McGoldrick, spoke positively about all three, but the impression given was that Hogan might be seen as having the most immediate potential to make an impact in such critically important games should the need arise.

When the 25-year-old is in full flow, he is a solid-looking striker; two footed, with a bit of pace, an eye for an opportunity and a sense of when and where one might arise. That, though, is to judge by highlight reels and those tend to date back to his Brentford days. At Aston Villa the goals have so far been few and far between.

“I think it’s probably a mixture of all those things,” suggests O’Neill. “First of all, it’s a new club. Villa should be a massive club – was when I was there – and expectation is very high. I think he’s just trying to settle in.

“It might be just a change of systems and things like this. I’ve watched him a number of times, games where he’s started and other games where he’s come on as a sub, and he’s still definitely dangerous in the box.

“There are parts of his game, I think he knows, he can improve on. That’s the whole idea, though, of going from Brentford – a lovely club, where he was well thought-of and a regular every single week – to a club where expectation is very, very high.”

Hogan is, in any case, keen to come in, the manager has previously suggested, while Islington-born O’Brien, who has represented Ireland at three different underage levels and scored a few goals along the way, described his first senior call-up as a “dream come true”.

James McCarthy, meanwhile, continues to endure something of an injury nightmare at Everton, but O’Neill has included him in his squad, albeit, it seems, without actually expecting very much to come of it.

“It’s one of those,” says the manager. “I’ve put him in at this minute just to see how things develop between now and the weekend. I’ll have to see how he is. At this minute, even though he’s in the squad, because he has not played for some time that would be, you know, playing proper football, would be a bit of a problem.”

On the topic of “proper football,” Wes Hoolahan is available despite a recent injury while Jeff Hendrick returns having been absent last month.

Eunan O’Kane and McGoldrick had to cry off a few weeks back but both are on course to be available to join up with the squad in Dublin next Monday. Harry Arter is more of a concern due to a calf strain, although O’Neill sounded optimistic enough as he said he would talk to the Bournemouth midfielder.

He remains defiantly upbeat too about Ireland’s chances of ultimately making the play-offs, insisting his side can win both of these group games, after which, he insists, his players would be unlucky not to get another crack in November at a place in the finals.

You can doubtless get good odds against them pulling it off but O’Neill and these players, as he likes to remind us from time to time, have defied good odds before.