After leaving Chelsea to join Atletico, striker will face his former club 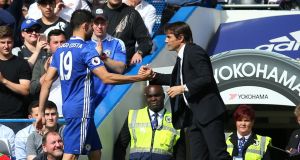 Diego Costa and Antonio Conte shake hands during their time at Chelsea. The pair will come face to face again on Wednesday evening after the striker’s controversial exit from the club. Photo: Catherine Ivill - AMA/Getty Images

Antonio Conte will come face to face with Diego Costa this evening as the Spain forward, who completed his move to Atlético Madrid on Tuesday, is intending to bid farewell to his former Chelsea team-mates and staff in the tunnel at the Wanda Metropolitano ahead of Wednesday night’s Champions League tie between the clubs.

The striker’s £57m return to the Spain was only formalised on Tuesday evening ahead of the Group C fixture at Atlético’s new home and, while Costa will not be presented to the home support on the pitch prior to kick-off, Chelsea have been led to believe he will be in the tunnel area before the game. Conte’s last contact with the 28-year-old was to send him a text message earlier this summer informing Costa that he had no future at Chelsea, with the player subsequently refusing to return from his home in Brazil and accusing the Premier League champions of treating him like a “criminal”.

The Chelsea head coach has never really elaborated on why the forward was surplus to requirements, other than to indicate a decision had been made in January around the time interest emerged from Chinese Super League clubs in the player, and has consistently sought to avoid the subject in his media briefings this term. But he was asked by Spanish journalists on Tuesday whether he would be willing to shake Costa’s hand if the pair come into contact at the stadium. “Yes, as I said before, I have no problem with Diego Costa,” he said. “I said that we wish, for him, the best for the future. We want to thank him for the last season. But, I repeat, I have no problem with him.”

Costa, Chelsea’s top scorer in each of his three seasons in south-west London and a two-time Premier League winner, took to Instagram on Tuesday night to thank the Chelsea supporters and his former team-mates.

“Some cycles begin while others end,” wrote Atlético’s new No18. “My cycle began at Chelsea three years ago – three remarkable years in all aspects – and I will never forget it. Two championship titles, a Community Shield, 120 matches, 59 goals and 24 assists later this cycle has ended. Not the way I would have wanted – far from it – but the best way possible.

“The wonderful fans of such equally admirable club and all team mates, as well as clinical, administrative and logistics staff will remain forever in my mind and in my heart. Will bring them with me in the certainty that I will always be by their side as well and I’m sure they will understand the reason why this cycle of mine has now ended – because I could not lose faith in myself. Thank you Chelsea for everything.”