‘Sanchez actually dives for the first free-kick and he should be booked for diving,’ he said 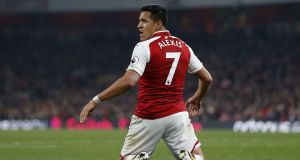 West Brom manager Tony Pulis has accused Arsenal’s Alexis Sanchez of ‘cheating’ to win his side a free kick in their Premier League clash at the Emirates. Photo: Ian Kington/Getty Images

Tony Pulis accused Arsenal’s “cheating” Alexis Sanchez of diving and believes West Brom should have been awarded a penalty during their 2-0 defeat at the Emirates Stadium.

Jay Rodriguez was brought down in the area by the clumsy Shkodran Mustafi in the eighth minute but he returned to his feet and forced Petr Cech to tip his shot onto a post as referee Robert Madley appeared to play the advantage.

Sanchez had by then already curled wide a free-kick he won on the edge of the area after a challenge from Craig Dawson, and on the occasion of Gareth Barry’s record 633rd Premier League appearance, Pulis remained angry at both incidents.

“The disappointing thing is Sanchez falls for the first free-kick, that’s cheating,” said the West Brom manager, who also felt Mustafi should have been sent off, to Sky Sports.

“Jay is very honest and does not get rewarded. Everyone saw what happened. Sanchez actually dives for the first free-kick and he should be booked for diving.

“Then you see the tackle in the box. The referee had a great view. Everyone has seen it and can make their minds up.

“It’s not only a foul but the player can be sent off as well. It can be a penalty and playing against 10 men but let’s forget about the referee.”

Arsenal first scored in the 20th minute when Alexandre Lacazette headed in the rebound from another of Sanchez’s free-kicks, and then in the 67th when the Frenchman struck from the penalty spot after Aaron Ramsey was fouled by Allan Nyom.

The three points took Arsenal up to seventh, leaving West Brom in 12th, and of the visitors’ potential penalty, Arsene Wenger said: “The referee left the advantage and they nearly scored from that.

“They hit the post. He could have given the penalty or not. He let the advantage.

Aged 36, West Brom midfielder Barry set a new Premier League appearance record, breaking that previously held by Ryan Giggs, and Pulis said of his captain for the evening: “Gareth has been a wonderful professional and still is.

“We hope he keeps performing like that until the end of the season.”

In his programme notes, Wenger wrote: “It’s an incredible achievement but he is a marvellous player.

“He’s been underrated because he is always focused, determined, strong in the challenge, has good vision, a top-quality left foot and is also a very good defender.

“He’s a very intelligent player on the pitch and breaking Ryan Giggs’ record is a remarkable achievement because it shows this guy has dedicated his life to the game.”