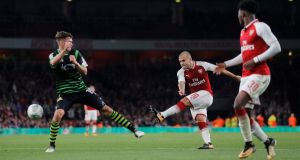 Defender Per Mertesacker praised “brave” Jack Wilshere after he shone on his first Arsenal start in 493 days as they eased past Doncaster in the Carabao Cup.

Theo Walcott scored the only goal of the night as the Gunners dominated large periods without adding to their 1-0 lead.

But it was Wilshere, who completed 90 minutes for Arsenal for the first time in almost three years, who drew plenty of plaudits for his performance.

“It was very good to have him back out there,” the German said.

“You can see that he’s getting more comfortable with his position now. He’s brave now and he trusts his body. That’s the most important thing, that he’s capable of playing 90 minutes.

“He will just grow with that and he was vocal as well, which was important for us, especially at the end. He kept the ball well in tight situations and to come out of that is vintage Jack.

“That’s what we want to see from him in the future here at Arsenal.”

Darren Ferguson led Doncaster into the game on the back of just one win in Sky Bet League One so far this season.

But, after seeing his side hang on against Arsenal’s early assault before pushing for a dramatic equaliser late on, the former Peterborough boss was pleased with their efforts.

“I’m proud of the players,” he said. “In a cup match you need a bit of luck but it was a fantastic learning curve in terms of concentration for my players.

“When you are a lower league team playing a team from the top level the opening 20 minutes can be difficult and I felt we were getting through that when Walcott scored.

“We created chances — the deflected shot and the one that hit the bar — and we stayed in the game for as long as we could.”

Gunners boss Arsene Wenger revealed he had invited his former rival along to watch the contest.

“I invited him tonight,” he said. “Sport is very good in that you fight against each other and with respect. He was a big personality in the Premier League.”

Arsenal will host Norwich in round four as Wenger seeks to win the competition for the first time.