Armenian says that Mourinho's words after Basel stuck with him 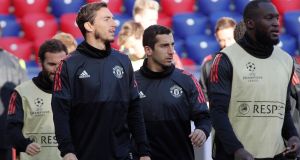 Midfielder Henrikh Mkhitaryan admits Jose Mourinho’s “PlayStation football” criticism will be at the back of Manchester United’s mind when they take the field against CKSA Moscow.

The United boss admonished his side after the 3-0 win over Basel earlier this month in their opening Champions League match, claiming they stopped being professional having gone 2-0 up early in the second half.

Mkhitaryan said those words left a mental imprint on the players, who will ensure there is no repeat performance in the Russian capital as United try to give themselves a three-point cushion in Group A ahead of next month’s trip to Benfica.

“Of course everyone knows that Jose Mourinho is very demanding and what he said was right,” the Armenia international said.

“He didn’t exactly say names but everyone thinks they have done something bad or made a mistake.

“We are trying to improve that aspect and stay more focused during the whole game and not be doing fantasy football or PlayStation, as he said, in the last 25 minutes.”

Mourinho admits he faces a “difficult situation” in Moscow as injuries to Marouane Fellaini and Michael Carrick have left him short in midfield.

Fellaini joined the list of absentees, which also includes Paul Pogba, after sustaining an ankle injury in Saturday’s win over Southampton following a first-half tackle from Shane Long.

Having watched replays Mourinho, who believes his side have to remain “humble” if they are to extend their unbeaten record this season, was unhappy with the challenge but he refused to criticise referee Craig Pawson, who booked the Saints striker for the challenge.

“All three midfield players we lose for this match so the solutions are not many but we try not to focus on individual battles in specific areas on the pitch.

“Fellaini was lucky, it could be a much worse situation but in a moment when we don’t have Pogba and Carrick, Marouane becomes even more important than he is and not to be here tomorrow is a difficult situation for us.

“But I expect Fellaini not to be out for a long time and after Crystal Palace there is the international break and Belgium I think were the first team to qualify so are not under pressure for a special big match, so Fellaini will be back for us.

“For me Craig Pawson is one the big talents of refereeing and he had an amazing game in my opinion, he was so calm and in control. No camera for Craig and he made that decision.”