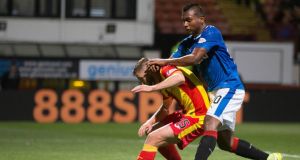 As expected, Partick Thistle fans went through the singing of: “You’re not Rangers any more” to the 4,000 or so opposition fans at Firhill on Tuesday night.

While this is now a ritual, rather undermined by the fact it is directed at unchanged supporters from Ibrox, there is a deeper truth to the taunt. Even those in blue cheering on their club know Rangers are not quite Rangers any more.

A fanbase abused by various boardroom regimes and individuals clings to the hope that if it walks like Rangers and talks like Rangers, then it will be Rangers once again, but this is Rangers with holes in its shoes.

It is personified by a manager, Pedro Caixinha, who may dress like Walter Smith and say “we are the people”, but who remains a curious choice to be in charge of such a vast institution.

While, superficially, Rangers appear settled, there are serious questions hovering over the club and those will land with force should Ibrox witness a Celtic victory in the first Old Firm game of the season today.

All present will know the details of the last instalment of this fixture, at the end of April, when Celtic were 4-0 up just past the hour and won 5-1, their biggest victory on Rangers’ turf since 1897.

Caixinha was in the job eight weeks then and beforehand acknowledged the “gulf” between the two Glasgow rivals, though he was “confident” it could be bridged. After the match, he said: “I am to blame.”

Unfortunately for Caixinha, a 46-year-old former assistant at Sporting Lisbon and Panathinaikos who had been working in Qatar when Ibrox called, it was not the last time he would have to make this statement.

About a fortnight later Rangers lost at home to Aberdeen for the first time since 1991 and then, seven weeks after that, Rangers travelled to Luxembourg for the second leg of a Europa League qualifier against Progrès Niederkorn, a club few at Ibrox had even heard of.

Rangers lost 2-0, the worst result in their history. Supporters’ humiliation was every bit as painful as European elimination. “I assume all the responsibility,” Caixinha said.

In one respect, he has faced up to this hat-trick of embarrassments, the causes of which predate him; but then Caixinha has also prepared and picked the team on these occasions.

Tactically, more was anticipated from him. Caixinha has surfed the Portuguese wave created by the big splash José Mourinho made more than a decade ago and with every passing defeat, the opportunity to manage a club of the scale of Rangers does not appear to be based on Caixinha’s CV.

When, last month, Rangers met Neil Lennon’s just-promoted Hibernian at home and lost 3-2, there was another result to slide across the Ibrox boardroom table to ask about.

This game was affected by the unjust dismissal of Rangers’ Ryan Jack, and the loss was submerged in the squall surrounding Lennon’s celebrations, but for Caixinha the problem was that it came after Progrès Niederkorn and after a summer of personnel flux overseen by him.

No fewer than 11 of the 18-man squad who endured that home defeat by Celtic in April have left the club, quite a vote of no-confidence in the past. But deconstruction is simple, construction is difficult, and it is the squad Caixinha has assembled since that is of concern.

In Scottish terms, Rangers spent heavily this summer on transfer fees and wages as Caixinha’s appointment was backed by cash.

There have been eight permanent signings and one of them, 21-year-old Colombian Alfredo Morelos, has scored eight goals in 10 games.

Morelos was signed from Finnish football for an estimated £1 million and is the sort of player who could be sold on to England’s second or third tier for three times that fairly soon, something of a Celtic way of operating.

Rangers have played their other Glasgow rivals twice in the past nine days and not beaten them over 90 minutes – the League Cup win on Tuesday came in extra-time. It is assessing this form which makes Gers nervous about Celtic.

Wednesday’s win at Dundee took Celtic’s unbeaten domestic run to 56 matches and if Brendan Rodgers’s team is victorious again at Ibrox, it will leave Rangers eight points behind Celtic after seven games.

Considering that over last season’s 38 games, Rangers finished 39 points behind Celtic, that would suggest there has been little uplift since Caixinha’s arrival.

So there is the prospect a bad home defeat will erode his credibility to the stage where the three-year contract signed in March will not bring protection. That might seem harsh given Rangers’ vulnerability as a club is hardly Caixinha’s doing, but the board will defend itself.

There will always be fingers crossed when the flags and angst of an Old Firm derby approaches, but the uncertainty Rangers feel is not just in contrast to the certainties of old, it also jars with the awareness of the organised vibrancy Celtic will bring to Ibrox.

Rodgers has produced a style and discipline well beyond the vague idea put out by his predecessor Ronny Deila. That development also contrasts with what Caixinha has achieved post-Mark Warburton.

Celtic will be eager to remind Rangers of the unbridged gulf between them, and afterwards that they have a bigger game next Wednesday in Brussels.

Celtic travel to face Anderlecht in what – realistically – could be described as the first leg of a playoff to see who comes third in the Champions League group containing Paris Saint-Germain and Bayern Munich.

While Celtic are thinking about playing European football after Christmas, Rangers are worrying about getting through today unscathed.

1 On healing and wild hurling: The re-education of Diarmuid Lyng
2 Few, if any, have given as much to Munster as Garrett Fitzgerald
3 Wexford best the weather and Kilkenny on a mad day to be hurling
4 ‘Your father works for my father’: Schools rugby turning toxic in the stands
5 Keith Earls far from ready to abandon centre stage
Real news has value SUBSCRIBE
Crossword Get access to over 6,000 interactive crosswords