Ireland are second in Group Five, level on points with Kosovo and five adrift of Germany 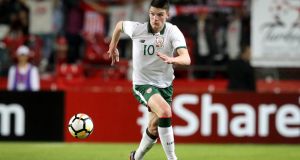 Declan Rice of the Irish under-21 squad. Photograph: ©INPHO/Ryan Byrne

Declan Rice and Kieran O’Hara return from the senior to the Irish under-21 squad for this evening’s qualifying game against Azerbaijan in Tallaght where Noel King’s side will be hoping to keep themselves on course for a top two spot by securing their fourth victory of the campaign.

Ireland are second in Group Five, level on points with Kosovo and five adrift of Germany, who they will play home and away in the autumn. The other two face each other this evening and so the hope is that King’s team will strengthen its position in relation to its rivals, both of whom it has games in hand on with the Germans having played once more, the Kosovans twice. The group winners will qualify for the finals with the four best runners-up progressing to play-offs.

When the two sides met in Baku last September, Ireland won 3-1 but the home side’s hopes of a fightback were hampered that day by the sending off of Elnur Jafarov just after the visitors had scored their third goal. So King is taking nothing for granted.

“They have the lad [Mahir] Madatov up [who has played this season for Qarabag in the Champions League and the senior international team] up front and a couple of other players who are a handful,” he says. “It’ll be tough, a challenge but if we play as well as we have done at times so far in the campaign then we should be in with a very good chance.”

King clearly has a few choices to make in the wake of last Thursday’s friendly win over Iceland in which Ryan Manning and Hale bothers Ronan and Rory all played, but a couple of changes seem inevitable despite what was a good team performance.

Rice and O’Hara are both bound to return and Reece Grego-Cox, joint top scorer in the qualification group with four goals, as well as Jake Mulraney, also seem likely to be accommodated. Everton midfielder Harry Charsley is out but Shaun Donnellan, who started in Baku, could well return to the Irish side’s defence.

In the day’s other underage international games, Tom Mohan’s under-19s face Portugal needing a win for a place at this summer’s finals in Finland while Colin O’Brien’s under-17s taking on Poland having already qualified for their finals in May.

Both games are effectively away with the Irish sides taking on the hosts of their respective elite round mini tournaments.

“Realistically, we were looking at going into the last game, with qualification in our own hands,” says Mohan. “Portugal are a quality side, and we knew we would have to beat them to have a chance. It’s great to be in this position.”