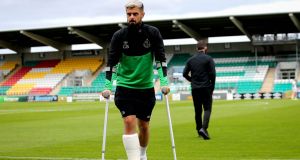 Shamrock Rovers midfielder Greg Bolger admits that he feared his career might be over after the badly broken leg he suffered in a mid-summer friendly game but the 32-year-old says he would be happy to feature in Sunday’s FAI Cup final following his successful return to action against Sligo over the weekend.

“It was a hard five months for me,” he says. “At the end of the day, I had to get a plate in my leg, and six screws so there was probably a bit of doubt there for a time. So just to be here now, I’m absolutely buzzing. I’m delighted to be back.”

Stephen Bradley said after Sunday’s semi-final that he had pushed Bolger to make himself available despite the player’s lingering concerns about whether he was ready or not.

Having got 15 minutes under his belt, though, and a couple of challenges in, the former Cork City player insists he is ready for the final if required.

“That was my aim in the last two weeks,” he says. “It was ‘I might get this final, I hope the boys get there’. So getting out on the pitch, getting a few minutes was great. I had a few butterflies in my stomach going on but the first tackle happened in the first two minutes and it was a case of: ‘Grand, here we go.’ So if the gaffer needs me, I’ll be available.”

The FAI has confirmed that the final against Dundalk will kick off at 6.40pm. Shelbourne, meanwhile, have announced that Alan Reynolds is to work as assistant to manager Ian Morris next season.