Manager not blameless, but the board must surely shoulder their share of responsibility 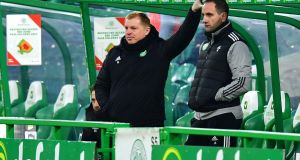 So much for managing Celtic as football’s equivalent to living on Easy Street. Fifteen years ago, Martin O’Neill’s tenure ended with a painful concession of the title on its final day to Rangers. Having stayed a season too long – even by his own admission – Gordon Strachan departed in 2009 with Rangers again the champions; the Celtic support were tired of one-liners and one-dimensional play.

Tony Mowbray toiled before being sacked. Having taken charge for the first time, Neil Lennon resigned in 2014 with the staleness of a one-horse race unable to stimulate him any longer. By the time the Ronny Deila project ended, two years later, there was acceptance that this punt was worthy of a smaller club. Celtic raised the bar in hiring Brendan Rodgers but there was only so long the current Leicester City manager would handle being the only fish in a small pond; internal rancour at the onset of season 2018-19 preceded the inevitable.

Nobody, however, has encountered anything like the level of vitriol afforded to Lennon at this, surely the dying embers of his second period in office. With police deployed towards a baying mob and missiles flying towards Celtic players and staff as they left their stadium after a first cup loss since Donald Trump was – for the first time – merely a hopeful presidential candidate, a rising tide of abuse reached a peak.

There can be no defence of the disgusting scenes, even before pandemic circumstances are contemplated, but they were not a complete surprise. Lennon, immersed in Celtic as player and manager, has been afforded some astonishing treatment from keyboard warriors and Football Manager obsessives. The next club bulletin that hails the “Celtic family” must be met with roaring laughter.

Celtic’s fans should – within reason – demand success. The current restrictions on people’s lives and the lack of alternative outlets may well fuel discord. Yet what appears to exist now is an entitled group who cannot handle defeat.

They have created such a frenzy about the concept of 10 Scottish titles in a row – a trivial achievement – that even rational fans have lost all sense of reason. In March, Lennon was being praised for reviving Celtic’s season to the point where they led Rangers by 13 points. Now, he is derided as an incompetent. Celtic, defensively awful, have a proper challenger in a revived Rangers; every error is amplified.

A number of their players believe they are on the verge of a move to a richer environment or should already be there. Lennon knew as much in August. “Get your mentality right, get your attitude right,” he said. “If some of you don’t want to be here, leave.” The Northern Irish man spent the subsequent weeks overpraising but the genie was out of the bottle. The body language of umpteen individuals has been damning.

Lennon has no interest in playing the victim. “I take it all” and “the past doesn’t count for anything” were among his remarks in the aftermath of Sunday’s defeat to Ross County. Lennon has an experience level to know he will ultimately pay for the sharp on-field decline. This level of toxicity and consistently error-strewn performance look fatal, even for someone with a 72 per cent win rate.

Lennon cannot be absolved of blame. Whatever team he put out against Ross County should have been strong enough. Successive 4-1 tankings by Sparta Prague cannot be acceptable for any Celtic manager. Even when winning earlier in the season Celtic were sluggish.

Still, this isn’t a binary discussion. It should be fine to emphasise the manager’s qualities without being accused of cheerleading. Lennon has previously demonstrated he can manage Celtic perfectly well; whether seeing off Barcelona with Efe Ambrose and Kelvin Wilson at centre back, developing Virgil van Dijk, stabilising the club after Rodgers’ sharp exit or presiding over that faultless run last season.

In deciding it was time to end his playing career, at Wycombe, Lennon believed the “humdrum” environment of lower league football did not excite him. The 49-year-old has emphasised awkwardness among his team when handling football during coronavirus but perhaps the manager himself, who thrives on the buzz of a big club, is not comfortable.

Nobody cared to listen when it was pointed out that Celtic were missing the opportunity to establish themselves as a strong European club during Rangers’ years in the wilderness. No club had more scope to plan and build than Celtic, who instead celebrated the swatting aside of teams with a 10th, 20th or 30th of their budgets with immense glee.

Twenty titles in a row should have been readily achievable. Being knocked out of the Champions League by Malmo or AEK Athens, far more reasonable barometers, did not seem to count. Without any pressure, the board could at least give the impression of being complacent.

By summer, Celtic were scraping around to sign a goalkeeper, Vasilis Barkas. The Greek cost £5 million (€5.5 million) but was subsequently dropped. Shane Duffy, an expensive loanee from Brighton, cannot get in the starting XI after a string of blunders. None of Celtic’s arrivals during the last two transfer windows have been successes. The team are desperately lacking quick wide players in attack.

While that makes it easy to raise questions over Nick Hammond, the club’s head of recruitment, that his predecessor Lee Congerton also endured struggles implies a wider structural problem. Celtic’s glaring waste of resource should not be glossed over. They have been allowed to revel in the sales of Moussa Dembélé and Kieran Tierney without sufficient acknowledgement of how much of that income has been eaten up by Marian Shved, Marvin Compper, Jack Hendry, Ismaila Soro, Patrik Klimala, Boli Bolingoli and swathes of others.

Decision making, pressure and confidence have all bled into Celtic’s run. The notion which has been allowed to linger – that Lennon is some kind of coaching dinosaur, only interested in rabble-rousing with players – is totally wrong. More analysis and more working on shape has been done with this squad than when Celtic were dominant, in an attempt to retrieve the situation.

Post-O’Neill, Celtic have been around the houses. Strachan, Mowbray, Lennon, Deila and Rodgers are all of completely different ilks. The lack of an obvious plan B now, added to an unwillingness to bow to screaming from the sidelines, have undoubtedly been prominent in the board’s thinking. Celtic have, collectively, sleepwalked into a perfect storm. – Guardian