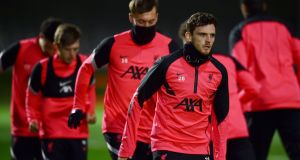 Liverpool defender Andy Robertson feels VAR is not doing what was promised and it lacks consistency. Photograph: Getty Images)

Andy Robertson has said players and fans are falling out of love with football because of VAR and ex-professionals should be tasked with reviewing its implementation.

The Liverpool defender was involved in the latest VAR incident to cost them on Saturday when his stoppage-time foul on Danny Welbeck enabled Brighton to equalise from the penalty spot.

It was the eighth VAR review to go against Liverpool this season, prompting James Milner to tweet after the game: “We need a serious discussion about VAR. Sure I’m not alone in feeling like they are falling out of love with the game in its current state.”

Robertson believes Milner’s opinion is shared widely throughout the game and football risks becoming a turn-off with VAR in its present form. The Scotland captain said: “It is affecting players, but it is affecting the whole game.

“I used to love going to games and just being in that moment of being able to celebrate a goal. That is being taken out of the game a wee bit. Now you are waiting two or three minutes to see if a goal is onside or offside and for me, if it is that tight, then leave it to whatever decision was originally made. There are lots of things you can go over, but Milly’s tweet was echoing what a lot of footballers and fans are feeling.

“A lot of people I have spoken to are not enjoying football as much as they once did because it is constantly in review, constantly on a screen and you are still not getting the consistency we are looking for. I agree with Milly. A lot of footballers and a lot of fans would agree with him, too.

Robertson believes a panel of former professionals from across the sport should review the use of VAR and the various rule changes, such as handball, that have generated widespread confusion and controversy this season. “Maybe ex-footballers, ex-managers and ex-referees should be involved in some of the decision-making that is happening now,” the Liverpool left-back said.

“In the last 18 months to two years there has been a lot of change in the rules in England in particular. Kevin De Bruyne said the other week that he wasn’t sure of the rules any more and we can all echo that. When VAR came in we believed there would be no grey areas, it would all be black and white, and I don’t think we are quite getting that now.

“I have no problem if my tackle on Saturday is a penalty. If the rules and the referee deem that as a penalty then I have no problem with it. But I watched games yesterday and saw two very similar instances on Marcus Rashford and Adama Traoré that went unpunished. They looked very similar to what I did to Danny Welbeck. Both of them were not a penalty and mine was. All three have to be a penalty or all three were not penalties.

“We are just looking for consistency. We believed we would be getting that with VAR and we are not getting it. If we are still discussing referees’ decisions after VAR then I would much rather leave it up to the referee’s naked eye. It is much easier to accept mistakes made with the naked eye than when there is so much technology around.”

Liverpool host Ajax in the Champions League on Tuesday needing a point to secure qualification for the knockout stages. Jürgen Klopp will be without Milner after he joined a lengthy injury list when damaging a hamstring at Brighton, and the manager has confirmed Thiago Alcântara is “weeks away” from returning from the knee injury sustained against Everton on October 17th.

Klopp said: “Nothing was ruptured and nothing was broken and that means everybody thinks: ‘Okay, you can go again after a few days,’ but the impact on the leg was that big that it is still not OK. I can’t say exactly when he will be fine but it will take a few weeks still with Thiago.”

Liverpool will this week submit a planning application to Liverpool city council to expand the Anfield Road stand by 7,000 seats. The plans, which would increase Anfield’s overall capacity to 61,000, were put on hold in April because of the coronavirus pandemic.