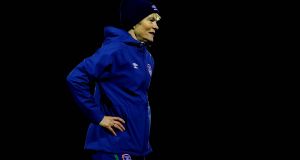 Irish women’s team manager Vera Pauw has described as “unfair” the fact that her players’ coronavirus test results are taking far longer to be processed by Uefa than those of Germany’s, which were completed before the eight times European champions travelled for Tuesday’s qualifying game in Tallaght.

The problem, says Pauw, is that Uefa contract all tests for its competitions to one contractor (Synlab) and that company does not use any laboratory in Ireland. As a result, the mandatory tests carried out on the Irish team on Sunday morning, were taken first to Belfast then Birmingham before travelling on to London where the actual analysis takes place, according to the coach.

The upshot is that Pauw must wait 32 hours or more, until after training on Monday, for confirmation that all of her players will be available while her opposite number, Martina Voss-Tecklenburg, is likely to have word back in a fraction of that time.

“We did our last testing yesterday morning,” said the manager on Monday morning. “If I have understood well, the samples went first to Northern Ireland, to Belfast, then to Birmingham on a flight, then by car to London. They should have arrived last night at nine o’clock and this morning we got a message that we only get results in the afternoon. This is unacceptable.

“I do understand that Uefa needs to have structures it but why do Germany already have their results while we need to wait until after our last training session? I think that this is something that Uefa really have to sort out.”

In the end, Pauw scheduled the training session so that she would have the results before it started. She says that when the Irish team based themselves in Germany last month ahead of the game in Ukraine, they got their tests back within four hours and that Tuesday’s opponents will likely - having completed their required testing before departure for Dublin - have benefited from a similar turnaround time because Synlab use facilities there.

“I do understand that Uefa cannot have labs everywhere, but Ireland, surely?” says Pauw. “Surely in Ireland there are enough labs that they could do it. But they are dealing with one company. And that lab, there's not a branch in Ireland. So that is the reason it's going there (London) but I think that there should be a solution for this because this is unfair competition.”

Pauw could certainly do without that. With Ireland’s rivals for a place in the Euro2022 play-offs widely expected to beat Montenegro in Kiev, her team needs a win over a German side that has coasted through the group and comes into the game with a 100 per cent record and top spot already assured.

Ireland will go into the fixture without Manchester City Megan Campbell or West Ham’s Leanne Kiernan, both of whom have been ruled out by injury.