Ireland looking for minor miracle as they host formidable Germany 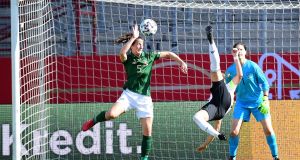 The Irish players are aiming to play their “best game ever” against Germany at Tallaght on Tuesday evening but manager Vera Pauw admits she is unsure just how far that will get them against a side that cruised through this qualification group so far without conceding a goal.

With Ireland’s rivals for the runners-up spot and the play-off it would bring, Ukraine, expected to beat Montenegro fairly handily in Kiev, Pauw’s side must almost certainly beat the eight-times European champions to stay in this edition of the competition.

The 57-year-old describes the challenge as the greatest of her managerial career and some perspective of the scale involved is provided by the fact that the visitors have lost just three qualifying games in the past 23 years. Pauw, as it happens, was part of the Ruud Dokter-managed Dutch side that triumphed in December 1997.

The closest Germany’s record comes to providing encouragement is the 3-2 defeat by Iceland in 2017 which came as quite a surprise at the time. The team subsequently lost at the quarter-final stage of the World Cup to Sweden but has so far been revitalised since under current coach Martina Voss-Tecklenburg.

To date, they have scored 43 goals without reply in their seven group games, a record the hosts will have to take at least a little of the shine off if they salvage second place in the group following disappointments in key games away against Greece and Ukraine.

Louise Quinn spoke at the weekend of the way in which the Irish had learned about their opponents and adapted to the various challenges they pose in September’s away game with Germany. Ireland did do well to hold their hosts scoreless through a relatively even second half. Clearly, though, at 3-0 up, there was not a lot of pressure on the home side.

There is not too much now either with top spot and a place at the finals already guaranteed but Pauw believes that having made quite a few changes for the game in Greece at the weekend, which they won 6-0, Germany will field their strongest team, something she regards as both a compliment and a challenge.

Pauw said on Monday that she will be without Leanne Kiernan, the West Ham striker, due a hamstring problem while Megan Campbell, whose throw-ins had previously caused the Germans problems, was ruled out of the game last week.

“We [stil] have players that can do something special,” said Pauw, who revealed that the pitch at Tallaght will be narrowed by three metres for the game. “If it’s enough to beat Germany, we can see tomorrow. We’ll only know after the game.

“We will do everything we can to get a result but if we don’t, I hope we show Ireland we have done everything we can within our capacity and we have done everything to make the country proud. The question is what is the more likely: Ukraine losing points to Montenegro or us gaining points from Germany? But, of course, the ball is round; that’s a cliché. We start at zero zero; that’s another cliché. We will try to play our best game ever and we’ll see where we end.”