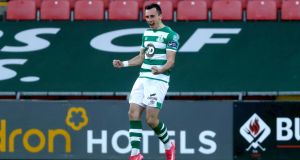 It is 33 years since a cup semi-final win over Sligo Rovers marked the end of the road at Milltown for Ireland’s most successful club. The Dubliners completed their most recent double that momentous year by beating Dundalk in the final. They left their new home in Tallaght following this win expecting to have to do the same next Sunday if a long and eventful round trip that took them to the brink of extinction more than once is finally to be completed.

A couple of first-half goals from Aaron McEneff were enough to complete what was a comfortable win, with Liam Buckley’s side having to spend the first half trying to get back on level terms after handing their hosts a soft lead from a corner less than four minutes in.

They played well for spells and had their chances, but couldn’t take any and the home side’s second, just before the break, was enough to give the contest a feeling of having already been settled through a patchy second half.

“We didn’t play well enough,” acknowledged Buckley afterwards. “They are the best team in the league so it was always going to be a hard ask, but that said it was a stupid goal to give away from our point of view five minutes in. We had a plan in place, but once they score so early and then again in the half late on, then it’s a complete change at half-time to try and get at them. We held our own in the second half and there wasn’t much in it, but it is what it is.”

His opposite number saw it much the same way, with Stephen Bradley acknowledging he felt the tie was well on its way to being decided when McEneff, having blasted home his first from close range, found the bottom right corner from 20 yards to double the home side’s lead on the stroke of half time.

By the 75th minute, the manager was comfortable enough, it seemed, to avail of the opportunity to test the fitness of Greg Bolger, who hadn’t kicked a ball for the club since breaking his leg in July.

“It’s brilliant,” said Bradley. “I’m delighted. He’s worked extremely hard since the injury, so I’m delighted to get him back on the pitch. He was worried himself before the game but I pushed him and said he’d be fine. He was excellent.

“The only thing in the head,” he added, with respect to whether the midfielder might get to play a part in the final, “would be legs in terms of a big pitch, but in terms of everything else; tackling, moving and playing, he’s ready.”

Aaron Greene should be too after missing this win with a knock, while Roberto Lopes will be allowed to train in midweek after he was belatedly deemed a Covid-19 close contact due to a passenger on the flight he took back from international duty a couple of weeks ago subsequently testing positive.

Bradley himself will be suspended for the final as a result of his sending off at Shelbourne a few weeks back, a decision he remains angry about, but McEneff is set to be centre stage at Lansdowne Road having scored four times between the quarter and semi-final.

“The headlines catch people’s eye but if I’m honest that is not my best performance today or ours as a team,” said the 25-year-old midfielder. “Semi-finals can be scrappy, but it’s nice to get on the scoresheet and it’s something I have worked on over the years and to grab two important goals today to send us to the final was really good.

“I’ve always said about this group there is a massive hunger and it comes from the training ground and the staff. There is a good mixture of experienced players and young hungry players and you see it in training every day. If someone is not doing their job they will get told. Late on in games lads are still trying to drive each other on, going for that next goal or a clean sheet. We have done it the whole season so we won’t be stopping now.”