All in the Game: Tottenham’s Dele Alli proves popular in Vermont 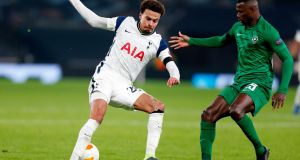 When Soccer. com unveiled a US map last week showing ‘Favourite Men’s Soccer Player By State’, based on their shirt sales in all 50 of them, their top three didn’t raise too many eyebrows. Lionel Messi and America’s own Christian Pulisic headed the list with 19 states each, while Cristiano Ronaldo was a distant third with six. There’s a chance he’ll demand a recount.

It was the other six players, though, who were each the favourite in one state, that prompted an outbreak of chin-scratching. They were Leonardo Bonucci (South Dakota), Bruno Fernandes (North Dakota), Marcus Rashford (Alaska), Anthony Martial (Hawaii), Sadio Mane (Oregon) and ...... Dele Alli (Vermont).

Dele’s popularity in Vermont caused the greatest amount of puzzlement, quite literally nobody able to figure why he should be so loved in the home of Ben and Jerry’s. “Does he like ice cream,” asked one Tweeter, who thought that might have been the link, while another suggested there were no ‘soccer shirt’ sales in Vermont at all and Dele’s was just handed out for free.

Another expressed no surprise over Oregon’s choice (“Sadio Mane can’t even walk down the streets of Eugene”), although the choice of Bonucci led to another befuddled respondent to ask: “Is weed legal in South Dakota?” We’re guessing: yes.

“I lost a great friend and the world lost a legend. ..... one day, I hope we can play ball together in the sky.” Pele bids adieu to Diego Maradona.

122 - That’s how many million Euros Barcelona will save after their players agreed last week to wage cuts. Just another, gulp, €366m needed to wipe out their recently announced debt.

“Would you put a salary cap on Banksy, Leonardo Da Vinci or Rembrandt? How can you put a cap on talent? We are in a capitalist world, but Gianni Infantino wants us to become North Korea. I have no problem with North Korea, but he can go live there and not me.” Super agent Mino Raiola not overly keen on Fifa president Infantino suggesting football should introduce salary caps.

“All the entourage around him now are a gang of defectors, clingers-on, traitorous sons of a thousand bitches.” Everyone had their say on Maradona last week, even the former Argentina national team masseuse, Miguel di Lorenzo, who paid this warm tribute to Diego’s circle of friends.

“Neymar is not even among the 30 best players in Europe right now.” Toni Freixa, a candidate in the forthcoming Barcelona presidential election, on being asked if he would re-sign Neymar for the club if he was elected. That’d be a no, then.

You’d imagine the only comeback Mesut Ozil might be interested in these days is a footballing one, him having not played a competitive game since last March, but for now, he’ll have to settle for the award for ‘Best Comeback in all of November’ for his exchange with Piers Morgan on the tweet machine.

Morgan: “I wish you would, Mesut. For your sake and Arsenal’s.”

Ozil: “Piers, was that really you, or was your phone hacked?”

To which you could only say: Ooooooooh.

Did Morgan leave it there? Don’t be silly. “First tackle you’ve put in this season - well done!” And, possibly still smarting, soon after: “I must say Mesut Ozil I admire your nerve in trolling Arsenal fans who pay your wages given you’re getting £350k-a-week of OUR money to sit on your arse doing **** all. Try training as hard as you work on being a clever dick. Then the manager might pick you.”

The score, though, remained: Mesut 1, Morgan 0.

“A promise is a promise. It cost me £500, but I keep my promises.” Jose Mourinho on rewarding Sergio Reguilon for his performance against Manchester City with, well, a £500 ham. Like you do.

“A football team is like an orchestra, you have different people for different instruments. And some of them are louder than others, but they are all important for the rhythm. Bobby plays, like, 12 instruments in our orchestra.” How much does Jurgen Klopp love Roberto Firmino? A heap.

“The jersey you are wearing must be honoured! Show some balls or we’ll come with baseball bats!” The, eh, motivational banner left outside Inter Milan’s training ground by a group of their Ultra supporters after they were beaten by Real Madrid in the Champions League last week. It worked: they beat Sassuolo 3-0 on Saturday.