Jonathan Barnett: ‘he could still be a Real player in three years when his contract ends’ 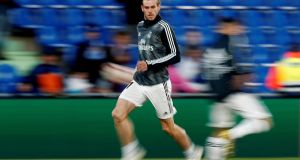 Real Madrid’s Gareth Bale will not be leaving the club on loan. Photograph: Reuters

While Zinedine Zidane expects Gareth Bale to leave Real Madrid imminently, the player’s agent says his move will not be a loan. The Wales forward, who has been linked to a move to the Chinese Super League, is only interested in a permanent move away from the Spanish side.

On Tuesday Bale’s agent Jonathan Barnett told Sky Sports News: “There will be no makeshift deals to get him out of the club. Gareth is one of the best players on the planet. I can guarantee you he will not be going on loan to any club.”

In response to a question on the player’s absence from Sunday’s pre-season game against Bayern Munich in Washington, Zidane replied: “Gareth didn’t play because he didn’t want to”, having earlier said: “The club is dealing with his departure … Bale’s not in the squad because the club is working on his exit. We will see what happens in the coming days.”

Bale’s relationship with Zidane has broken down, with the coach having been emphatic that a move is the right solution for both player and club. Despite 29 league appearances for the club last season Bale, who turned 30 last week, was a regular fixture on the bench in the latter stages, and opted against joining his teammates for the end-of-season lap of honour at the Bernabéu after being an unused substitute in defeat to Real Betis on the last day.

His most likely route away from the Bernabéu remains a move to a Super League club in China. His options have been limited by his age, potential transfer fee and salary – he is currently earning €17m (£15.25m) a year after tax.