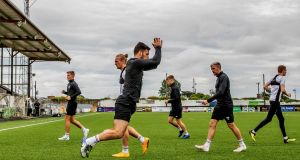 Ireland’s Dundalk are set to play either Montenegro club Sutjeska or APOEL of Cyprus in the Champions League third qualifying round if they can get past Azerbaijan side Qarabag.

The New Saints of Wales are taking on Copenhagen in the second qualifying round, and the Oswestry side will then meet either HJK Helsinki or Red Star Belgrade.

Elsewhere in Monday’s draw, Celtic will face either Romanian side Cluj or Maccabi Tel-Aviv of Israel should they progress to the third qualifying round.

The Scottish side still have a second qualifying-round tie against Estonian champions Nomme Kalju to navigate as they look to keep alive hopes of making the lucrative group stages.

Neil Lennon’s men saw off Sarajevo in their opening European tie of the new campaign. Should Celtic progress again, the third-round matches will be played on August 6/7th and 13th.

Sides defeated in this round will transfer to the Europa League champions path play-offs.

The Europa League third-qualifying round draw also took place on Monday, with the main section set to follow after the champions path.

Shamrock Rovers will make it here if they beat Apollon Limassol of Cyprus. That would set up a clash with FK Austria Wien.

Should Northern Ireland side Linfield get past HB Torshavn, they will play either Sutjeska or APOEL.

The New Saints will face Iceland side Valur Reykjavik or Ludogorets of Bulgaria, if they lose to Copenhagen.

Celtic went into Group Two of the draw, which could potentially see them play either Shkendija of North Macedonia or Luxembourg club Dudelange.

Champions League defeat would send Dundalk into a third-round Europa League qualifying tie against either Slovan Bratislava of Slovakia or Kosovo side Feronikeli.