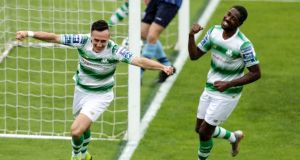 Dan Carr and Aaron Greene each scored twice as Shamrock Rovers followed up their Europa League success with their biggest win of the league season in blitzing hapless UCD at Tallaght Stadium.

The all too comfortable victory moves Rovers to within five points of leaders Dundalk, though with a game more played.

Depleted UCD drop back down to the foot of the table on goal difference.

Rovers made light of both the blustery, wet conditions and UCD to run up a 4-0 advantage inside 22 minutes.

Graham Cummins, Jack Byrne and Aaron McEneff all had chances before the lead arrived 13 minutes in.

Byrne’s pass found the run of Cummins who shot past Gavin Sheridan for his first goal for the club since joining on loan from Cork City.

That was doubled on 19 minutes, Byrne’s corner was met at the near post by McEneff whose firm header was touched to the net by Carr.

Rampant Rovers scored again two minutes later with an attack from their left flank. Sean Kavanagh curled a low cross into the near post for the run of Carr who side-footed to the net.

Thursday night’s Europa League hero Byrne was given too much room in the area as he jinked one way then the other before drilling a low left-foot shot to the net from a tight angle.

Jason McClelland had UCD’s first sight of goal four minutes before the interval, forcing a fine save from Alan Mannus with a drive from distance.

But service resumed at the other end within two minutes of the restart as Rovers stretched their lead further.

Substitute Greene burst through down the inside right channel to cross for McEneff to score with a simple tap in.

Greene got Hoops’ sixth goal on 58 minutes, glancing a header in from Kavanagh’s cross.

And Greene punished a defensive error to sweep home his second, and Rovers’ seventh, goal 18 minutes later to complete the rout.