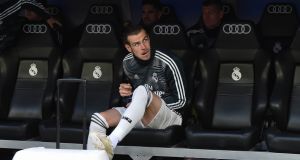 Gareth Bale: won the Champions League four times in his six years in Spain. But he is now heading for the exit door as he is not in head coach Zidane’s plans. Photograph: Denis Doyle/Getty Images

Real Madrid and Gareth Bale are working on his exit from the Bernabéu after six years in Spain, with China offering him a way out.

The relationship between the Welshman and Zinedine Zidane has broken down entirely with Bale’s agent, Jonathan Barnett, calling the coach “a disgrace” after he admitted he hoped a departure was “imminent”.

Having previously insisted that Bale did not want to leave, progress is now being made on a move which both the club and the player hope to conclude within the week.

Zidane said Real were working on Bale’s departure after leaving him out of the squad to face Bayern Munich in Houston in a preseason clash . He said he hoped there would be a solution, and perhaps within a day or two. Despite that, there is still work to be done and there is no guarantee yet that a deal will be concluded.

A continuation of the stalemate remains a possibility, with Real still reluctant to accept a free transfer. They had hoped to raise money from his sale to fund their rebuilding, with Paul Pogba as Zidane’s primary target.

Bale’s options have been limited by his age, salary and transfer fee and his camp initially insisted he had no intention of moving. The Welshman is on €17m a year after tax and has refused to take a pay cut.

Europe’s biggest clubs have been unable to put together a convincing package. Manchester United were not prepared to bid and Bayern Munich could not afford him. There had been suggestions of a return to Spurs, but Bale had ruled out a loan.

China’s Super League clubs can match Bale’s wage demands and there is a determination to continue signing big names – but 100 per cent tax on transfers makes it difficult to put an agreeable offer to Real, who may have to cede. While Real are reluctant to release him cheaply, his wages account for more than €100m between now and the end of his contract in 2022. China’s transfer window closes in nine days.

If a deal can be done, it would be seen as a victory for the coach, but Barnett insisted: “If and when Bale goes it is because he wants to, not because Zidane pushed him. I don’t know if Madrid are working on this; I certainly am.”

“Bale’s not in the squad because the club is working on his exit,” Zidane said on Saturday following a 3-1 defeat against Bayern in which 22 players got a game. “We will see what happens in the coming days.”

The coach admitted the decision was his and, pushed on when the situation might become clear, replied: “I’m not going to talk about that. We’ll see if it’s tomorrow, [so much the] better. It is not personal at all: there comes a time when things are done because they have to be done. I have to take the decision and we have to change. [The situation] will change. I don’t know if in 24 or 48 hours, but it will change. And that’s good for everyone.”

He added: “I am the coach and I speak to the club and we have to take the decision. The exit is the coach’s [decision] and the player’s too; he knows the situation, so let’s see how we resolve this.”

Barnett responded: “Zidane is a disgrace for talking about Bale like that. He shows no respect for a player who has done so much for Real.”

Zidane has sought to increase the pressure on the Real president, Florentino Pérez, to force Bale out but, while his position was clear, this is the first time he has publicly claimed that there is progress.

Real had yet to receive a firm offer and Pérez had arrived in Houston where he discussed the issue with his coach and suggested that, in the event of Bale staying, it would be sensible to accommodate him. But the situation is becoming increasingly difficult to sustain.

That Bale’s camp, which had continued to insist on his intention to stay, has publicly entertained the possibility of leaving for the first time represents a significant shift. They remain furious with Zidane. The coach tried to make Bale play in a position he did not want to occupy during his first spell as Real manager and then began denying him opportunities.

Bale was offered no explanation for his absences. He came off he bench to win the 2018 Champions League final against Liverpool with a stunning overhead kick – his fourth European Cup in six years in Spain.

After that final, Bale said he would have to consider his future. Instead, it was Zidane who left Madrid. He had wanted to sell Bale then; when he returned nine months later, he was even more determined and made no secret of his intentions. There was no attempt to bring Bale back into his plans, despite the departure of Cristiano Ronaldo.

At the end of last season, having consistently left Bale out, Zidane admitted: “It’s clear what I have done”. Yet his bluntness this time was still striking.

Barnett’s response underlines a breakdown in the relationship and makes the fact that any kind of rapprochement is unlikely now. A wildly successful era in Spain looks set to come to a sad and unexpectedly bitter end.

1 Gerry Thornley: Wild reactions to this Ireland team as fickle as the wind
2 Dan Tuohy explains ‘rotten to the core’ comments
3 Cheltenham keeping a watching brief on coronavirus
4 England and Eddie Jones at the vanguard of rugby’s hybrid era
5 Five Golf Classics for you to tee up at in 2020
Real news has value SUBSCRIBE
Crossword Get access to over 6,000 interactive crosswords