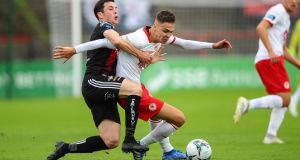 A week which began with Bohemians losing 1-0 to UCD and then receiving a fine from the FAI - as well as having the defeat upgraded to 3-0 - for fielding an ineligible player in the same game ended with the Gypsies extending their lead over St Patrick’s Athletic to eight points.

Keith Long’s side also clawed back those three goals courtesy of Ryan Swan’s brace either side of half-time and Conor Levingston’s 82nd-minute penalty.

The Bohemians manager was particularly pleased with the way his side reacted to the unsavoury scenes of Monday night, in which captain Derek Pender was hit with a suspension for this Dublin derby after confronting UCD goalkeeper Conor Kearns.

Despite that fallout, Long was adamant his players were not side tracked. “No, no. We can’t affect what goes on off the field,” Long said. “It was important we bounced back from Monday, there’s no doubt about it. I don’t want the narrative to be what’s gone off the pitch, that’s outside of our control.

“We’re disappointed with some of the scenes at the end of the game but I think we’ve answered some questions about our character. There’s plenty of resolve in this team, there’s plenty of good character in the dressing room.”

Swan showed striker’s instincts to nip in at the near post with a neat header two minutes before half time and open the scoring.

Levingston made no mistake with his penalty eight minutes from time and Swan rounded off the evening with an easy tap in.