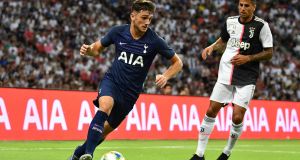 Troy Parrott of Tottenham Hotspur in action against Juventus at the Singapore National Stadium on Sunday. Photograph: Thananuwat Srirasant/Getty Images

At just 17, the Dublin-born striker has been promoted to the Spurs first team by Mauricio Pochettino, starting and starring on his debut in Sunday’s friendly against Juventus.

Parrott has been a prolific goalscorer at underage level, but injuries have kept him off the international stage since last October.

Now that he’s fully fit, and with McCarthy having a friendly against Bulgaria to experiment with following the Euro 2020 qualifier with Switzerland on September 5th, Dunne feels his elevation is due.

Dunne was part of a cohort of graduates from Brian Kerr’s youth teams, alongside Robbie Keane and Damien Duff, who were afforded their breakthroughs by McCarthy during his first spell at the helm.

He believes Ireland’s goalscoring problems strengthen Parrott’s claims. Four of McCarthy’s main forwards – David McGoldrick, Seán Maguire, Callum Robinson and Scott Hogan – have yet to get off the mark at international level.

“We’re lacking goalscorers and pace in the team,” said the 80-times capped former Ireland defender, speaking on Monday as the FAI’s Festival of Football began in Kells, Co Meath.

“We can’t wait forever for kids to become first-team regulars before they play for Ireland.

“If they’re almost first-team squad members at Premier League clubs, they won’t be a million miles off our team. I’ve not seen much of Troy but he’s been around the Tottenham first team for a while.”

From working with the Ireland Under-16 squad last season, I can see plenty of talent

The Tallaght native doesn’t confine the blood transfusion to Parrott. Ireland have reached the semi-final of the Under-19 European Championships without a clutch of regulars. Players such as Norwich City striker Adam Idah and Aaron Connolly of Brighton and Hove Albion were retained at clubs for involvement in pre-season matches.

“We seem to have a lot of game-winning and creative players coming through. From working with the Ireland Under-16 squad last season, I can see plenty of talent.

“Between Adam Idah and Troy, it is amazing to have two young strikers knocking on the door trying to break into Premier League first-teams.

“It seems to be the start of something positive now. Mick and his assistant Robbie [Keane] will have watched these players. All going well, we could have those two as Ireland regulars for the next 15 years.”

Turmoil within the FAI hasn’t gone unnoticed by Dunne – not that he fears it will adversely affect McCarthy and the players. They head into the second half of the competitive campaign in September five points clear at the top of their qualifying group.

“Mick is all about protecting the players and will deflect any questions about the FAI away from them,” said Dunne. “I don’t think the players would even consider asking Mick: ‘What’s going on?’ They’ll concentrate on getting one of the two places from the group into the finals. Denmark and Switzerland are tough sides but we can’t be fearful of them.

“These are teams of similar level to us in terms of where we see ourselves. We should not only be competing with them but beating them.”

Interviews to replace Colin Bell, who left three weeks ago for Huddersfield Town, are under way, but the likes of Under-19 head coach Dave Connell doesn’t appeal to the Manchester City defender.

“It needs to be external for the progression of women’s football,” she asserted.

“For too long, we’d just accepted things. Going internal, which is just a cop-out, would mean regression. All we’ve fought for over the last three years would get forgotten.”