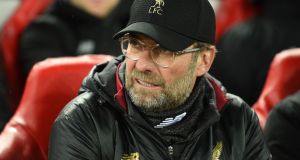 Liverpool manager Jürgen Klopp: “There’s no doubt that [Solskjær] will be the manager next year. Photograph: Oli Scarff/ AFP/Getty Images

Jürgen Klopp has said Liverpool will be under “too much pressure” should they consider tomorrow’s visit to Manchester United a defining moment in the title race rather than an opportunity to inflict a first Premier League defeat of Ole Gunnar Solskjær’s reign.

The Liverpool manager is acutely aware of the perception that Old Trafford is the most difficult assignment remaining, on paper at least, in his team’s pursuit of a first league championship for 29 years. Liverpool will move three points clear of Manchester City with a first win at United since their last title challenge in 2014, but Klopp believes it would be self-defeating to consider the wider implications of tomorrow’s outcome.

“If we would see it like a lot of people see it – that it is the game – then that is too much pressure on everybody,” said Klopp, who remains without the injured defenders Joe Gomez and Dejan Lovren. “You cannot do it like that. If we lose the game, and I don’t think about losing the game, then we are still level on points with Man City, and Tottenham are probably only two points behind. That is the worst thing that can happen.

“Now it is a really big one. I know that, I respect that. Everybody knows that Manchester United against Liverpool is one of the biggest games in world football. We have to prepare for that and still play a game.”

Klopp added that he believes that Solskjær will be United manager next season having restored “all the things Sir Alex Ferguson stood for” at Old Trafford since his loan arrival from Molde following José Mourinho’s dismissal in December.

“I’m really happy for Ole that he got the opportunity to show his quality,” the Liverpool manager added. “It’s not the best news for us obviously, but for all Man United fans it’s brilliant that they bring in all the things Sir Alex Ferguson stood for, but with all the new things in football.

“Now he’s in charge and there’s no doubt that he will be the manager next year as well. That’s clear. Can you imagine one situation when they say: ‘We bring in another manager?’ ” – Guardian