Neil Lennon: ‘I’ve got big shoes to fill’ at Celtic 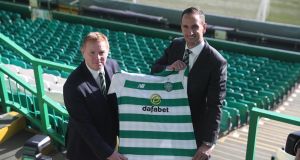 Neil Lennon insists he is not looking beyond the end of the season after taking his “twice in a lifetime” job at Celtic.

Lennon has been appointed Hoops manager for the remainder of the campaign following Brendan Rodgers’ sudden departure to Leicester.

The former Celtic captain won three league titles and two Scottish Cups in just over four years in his previous stint as manager, after taking over in March 2010.

Lennon now has the chance to guide Celtic to a third consecutive treble — they are eight points clear of second-placed Rangers with the Betfred Cup already in the bag and with a William Hill Scottish Cup quarter-final against Hibernian, whom Lennon left in January, to come at Easter Road on Saturday.

“It was a no-brainer, I’m very grateful to be here. The board have put their faith in me to see out the season,” said the 47-year-old.

“The most important thing is the club. They’ve lost a manager who will go down as one of the greats. I’ve got big shoes to fill.

“The team’s been unbelievable under Brendan. When I took over the last time the club was in a very different position.”

Asked whether he wanted the role beyond the end of the season, Lennon said: “It’s not up to me. I’m not even thinking about that, the club comes first. It’s about the club and the players.

“This is a club decision and come the summer it will be another club decision, what the board think is best for the club going forward.”

The Northern Irishman, a fiery character both as a player and manager, insists he has mellowed since his first spell in charge.

“I’m not as volatile I don’t think. I wanted to take on the world when I first took over,” he said.

“I think you learn from that, but I’ve still got that energy and that will to win. That will always be with me.

“I don’t want to be compared with Brendan, I know some people will do that. Brendan has his way and it’s been fantastic, and I have my way.”

1 Gerry Thornley: Home and away Six Nations could be its ruination
2 Aviva 10-year ticket holders seek clarity over payment
3 Darcy says enforced break could end up being a positive for Dublin
4 Coming fourth in the Olympics didn’t change this fearless quartet, time did
5 Sideline Cut: Vignette shows why Bird is the true shark in The Last Dance
Real news has value SUBSCRIBE
Crossword Get access to over 6,000 interactive crosswords