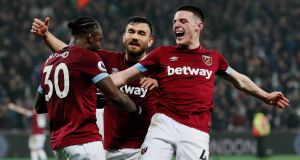 Declan Rice will pursue an international career with England instead of Ireland.

Mick McCarthy says that he was completely unsurprised when finally informed that Declan Rice had opted to play for England. The Republic of Ireland manager met the player in December and says he “just got a feeling,” then how the saga would end. “All I needed was it confirming,” he says.

The former international defender, who was himself born in England to an Irish father, says he remains uncertain as to Rice’s precise motives or what caused the now 20-year-old to delay his announcement for two months after the pair met but says he believed if Rice’s intention had been to play for Ireland, it would most likely have happened almost immediately.

“I haven’t had it confirmed by him so I couldn’t really comment on it, but the quotes from him was that he wanted to win things and I guess he’s looking at the England team and how well they did at the World Cup, that he wants to be part of that. If that’s what he wants to do and good luck to him. I want players who want to play for us, as simple as that.”

Pressed on the delay in making his decision public, McCarthy said he could only speculate.”I think he didn’t want to tell anyone, he needed to make his mind up, I guess. Do you know what? I’ve no idea. It could have been: ‘I’ll see how I continue going, I’ll see how I play for West Ham, I’ll see if I stay in the team, I’ll see how much interest there is within England’.

“I’m only guessing at that, I’m putting myself in his shoes. All I know is if he wanted to play for Ireland - and he’d made his decision, it was an easy decision because he’d had three caps - all he had to do was say ‘yeah I’m staying with you guys, I’m playing.’

“Once he hadn’t done that when I met him, I was very doubtful but I was not going to say that, I wasn’t going to put words in his mouth and I wasn’t going to leave it open for anyone to say I had driven him away because I hadn’t, that’s for sure.

“He’d other people in his family who wanted him to continue to play for Ireland so maybe that made it a bit more difficult. In my own mind, though, I never thought he was coming with us and I kept getting little vibes from different clubs and players and stuff that had been talked about so it was no surprise, I just wanted the decision and then I could stop talking about him.”

Asked if felt money had been a major factor, McCarthy observed: “I don’t think Robbie (Keane) is struggling for a buck and one or two others, Duffer and people like that. I think they’ve all done alright out of the game, playing for Ireland. I don’t know if that’s a consideration, I really don’t know.

“There’s so much been written about it and spoken about and of course the longer it goes on the more conspiracy theories that go about and why it happened. He hasn’t so this is it now, I don’t want to talk about him or the situation because he’s not my player and we’re going around in circles.

“I have to tell you, though, he might just be sweating seeing (Sean) Longstaff playing at Newcastle, because there’s going to be a few coming through for England.”

1 Tianna Bartoletta: ‘After you’ve gotten your medal, you become black in America again’
2 Timo Werner giving up on Liverpool dream on path to being truly wanted
3 Ian O’Riordan: An education in race and running during college days in America
4 Betting shops face uncertain future as they prepare for Monday reopening
5 ‘Unbridled passion’ - Turlough O’Brien steps down as Carlow manager
Real news has value SUBSCRIBE
Crossword Get access to over 6,000 interactive crosswords