Nantes lodge complaint with Fifa over Sala payment from Cardiff 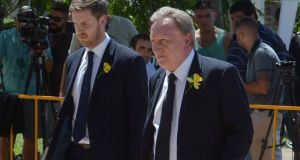 Nantes have lodged a complaint with Fifa over Cardiff’s refusal to pay the first instalment of the £15 million transfer fee for Emiliano Sala, world football’s governing body has confirmed.

The 28-year-old Argentinian striker died in a plane crash in the English Channel on January 21st, two days after the Premier League club had made him their record signing.

After an initial outpouring of mutual grief, Cardiff and Ligue 1’s Nantes have been at loggerheads over that fee, with Nantes demanding payment as agreed in the contract, while Cardiff have said they want to wait for the investigation into the crash to be completed.

Nantes’ lawyers wrote to the Welsh club on February 5th asking for the first of three annual payments to be paid within 10 working days, a deadline that was then extended last week until February 26th.

Having received no payment, however, the French side have carried out their threat to take the matter to Fifa’s Dispute Resolution Chamber.

In a statement, a Fifa spokesperson said: “We can confirm that we have received yesterday evening a claim from FC Nantes against Cardiff City in connection with the transfer of Emiliano Sala. We are looking into the matter and consequently we have no further comments at this stage.”

Cardiff said they remained “committed to ensuring fairness and accountability” over the deal, but insisted “the facts surrounding this tragedy” had to first be established.

A statement from the club read: “Cardiff City remains committed to ensuring fairness and accountability with respect to the agreement between Cardiff City and FC Nantes, but first and foremost the relevant authorities must be allowed to determine the facts surrounding this tragedy. It is inappropriate to comment further at this stage.”

Speaking to reporters last week, Cardiff manager Neil Warnock said he was confident the row would be settled “in the near future” but Nantes have clearly decided to accelerate matters.

Officials from both clubs, including Warnock, attended Sala’s funeral in Argentina 11 days ago, but relations between the two parties have become increasingly fraught as they have bickered over the payment timetable.

The Air Accidents Investigation Branch released an interim report on Monday which left several major questions unanswered, including whether the pilot David Ibbotson, who also died in the crash, or the single-engine aircraft were licensed for commercial flights.

Any wrongdoing in regard to the flight could annul Cardiff’s insurance policy for Sala and, if that wrongdoing was another party’s responsibility, they may have to sue for compensation.

That could mean Cardiff having to take legal action against Willie McKay, the agent at the centre of the deal, although the Monaco-based Scot has repeatedly denied any wrongdoing and has said the Premier League side are trying to “throw him under the bus”.

Cardiff have so far not responded to McKay’s claims.

In the meantime, Nantes owe half of the transfer fee to Sala’s former club Bordeaux, whom they beat 1-0 on Sunday to ease their relegation concerns.

Cardiff, on the other hand, lost 3-0 to Everton on Tuesday, their second heavy home defeat in five days.