Evra dismissed by Marseille after being hit with Uefa ban 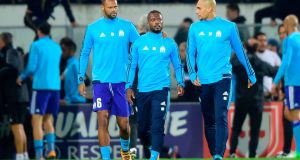 Marseille defender Patrice Evra is escorted off the pitch by team-mates Rolando and Doria after an argument with supporters before the start of the Europa League group match against Vitoria SC in Guimaraes. Photograph: Miguel Riopa/AFP/Getty Images

Patrice Evra’s contract with Marseille has been terminated with immediate effect following the French defender’s seven-month ban from Uefa competitions.

The former Manchester United full back, now 36, was dismissed prior to the start of the Europa League clash with Vitoria earlier this month after clashing with a Marseille fan.

On Friday afternoon Uefa announced Evra had been suspended from all European club matches until June 30th next year and fined €10,000, with Marseille then promptly publishing a statement that said the south-coast side and the player had mutually agreed to “end their working relationship”.

1 Cheltenham faces criticism after racegoers suffer Covid-19 symptoms
2 Ian O’Riordan: Learning to run for the first time all over again
3 Wilson Kipsang arrested for breaking coronavirus curfew with bar lock-in
4 Pelé’s personal keepsakes to go under the hammer
5 Paddy Mayne: The bravehearted Irish Lion who joined the SAS
Real news has value SUBSCRIBE
Crossword Get access to over 6,000 interactive crosswords