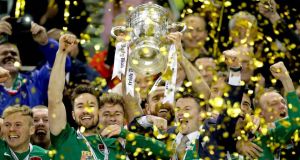 If the green mist that often engulfs the pitch during Cork City games sometimes seems to get the better of Mark McNulty, the goalkeeper had a good day here. With the nonstop pyrotechnics producing smoke so dense at times that it was difficult to make out the more distant players, the Aviva Stadium was a stage perfectly set for this week’s comic-book villain to produce a star turn – and he did just that, although it was not quite the type of blowout that Dundalk fans had been hoping for. They goaded him from the outset, but he silenced them in the end.

McNulty’s save from Michael Duffy was the defining moment of the penalty shoot-out that decided this FAI Cup final. As his City team-mates erupted in celebration around him he took a moment to flash the opposition supporters a smile. Happily, though, for a man who puts up more often than he shuts up, he left it at that. “I get the height of abuse from everyone,” he said afterwards, “but it couldn’t have worked out any better. To win a double in front of the Dundalk fans, who’ve given me a lot of grief, was nice. I loved it.”

The spat with Stephen Kenny this week, he suggested, was a just a distraction. He had, he said, come well prepared for the real business of the day. “I looked over every Dundalk player who had taken a penalty in the last two to three seasons. I knew that one of the five is going to go the way that I have seen on the videos. One of the five has to go that way. Thankfully I made that one save to help us win the cup.”

His team-mates had done their homework, too, he said. “We do penalties every day in training, every day, so I knew that we were going to bang in five. I preferred not to watch ours, but no doubt the Dundalk fans would have told me had we missed one. I didn’t hear any cheers.”

You need to look around and remember that these are all the guys you won the double with. And tomorrow night will be a special night back in Cork

The ones from the Cork City fans that followed Kieran Sadlier’s winning spot kick were loud enough to be heard most of the way to Turner’s Cross, though, and the travelling support raised the roof again when the departed heroes Seán Maguire and Kevin O’Connor were presented to them by manager John Caulfield a little later.

“These are a phenomenal bunch of boys,” the Cork City boss said of the whole group afterwards. “I just said to them there afterwards, ‘As a group of players you’ll never be together again. You need to look around and see the guys here and remember that these are all the guys you won the double with. And tomorrow night will be a special night back in Cork.’ ”

More special, for sure, that it will be Dundalk where, Stephen Kenny acknowledged, the pain of this disappointment will take a little while to pass. The extent of it was etched in the face of the club captain, Stephen O’Donnell, who has had his share of celebrating successes over the past few years but was frank here about why the team had failed.

“Once you go up in a tight game like this you have to see it out,” he said quietly. “There’s no other way about it: you have to see the game out.” They dominated for spells, he said, but “as a team we have to create more when we are dominating. When you are dominating the game like that you’ve got to score a couple of goals. We didn’t, and when you only score one it’s still in the melting pot.

“We knew then that they threw bodies on and went direct, but as a team we have to see it out. We have to be better on the ball, too. When we were getting it, even though we were 1-0 up, we were just kicking it back to them. Simple as that. It was a bad goal to concede, but really we invited them on to us, and they didn’t really have to do anything special to get the equaliser. When it goes to pennos it’s just the strike of a ball.”