Remember Paris and a certain handball, that wasn’t the only handball controversey 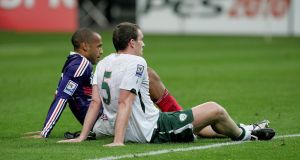 Theirry Henry and Richard Dunne after the infamous Paris encounter in 2009. Photograph: Inpho

Northern Ireland were on the wrong end of a controversial penalty award in Thursday night’s World Cup qualifying play-off defeat to Switzerland in Belfast.

Romanian referee Ovidiu Hategan awarded the spot-kick after judging Corry Evans had blocked a shot with his hand, allowing Ricardo Rodriguez to step up and score the only goal of the game with the second leg to come in Basel on Sunday evening.

Here’s a look at some of the other biggest World Cup controversies . . .

The Republic of Ireland claimed Thierry Henry cost them a place in the 2010 World Cup finals after the Frenchman admitted handling the ball in the course of setting up an extra-time winner for William Gallas in the second leg of their qualifying play-off in Paris. Swedish referee Martin Hansson failed to notice the incident, which led to calls from the Football Association of Ireland for the tie to be replayed. Fifa refused, and further ruled it could not sanction Henry under its disciplinary code. However, it later emerged that Fifa paid compensation to the FAI over the incident.

Lampard over the line

Frank Lampard looked to have equalised for England in their last-16 clash with Germany in the 2010 World Cup in Bloemfontein when he crashed home a long-range effort. Lampard’s shot ricocheted off the underside of the bar and bounced clearly over the line — but Uruguayan referee Jorge Larrionda did not award a goal. Instead of bringing the match back to 2-2, England were left trailing — and Germany shrugged off the controversy to sail on to a 4-1 win. Fifa’s president at the time, Sepp Blatter, later admitted it was the moment when his view changed on the need to introduce goal-line technology.

West Germany goalkeeper Harald Schumacher was guilty of one of the most notorious fouls in football in the semi-finals of the 1982 World Cup in Spain, when he raced from his goal and launched himself at on-running French player Patrick Battiston. Such was the force of the impact that Battiston was left temporarily unconscious, as well as losing two teeth and damaging bones in his back. Referee Charles Corver did not even award a free-kick. West Germany went on to win the match on penalties.

Diego Maradona was the first to admit he had handled the ball into the goal to put Argentina on the way to beating England in the quarter-final of the 1986 World Cup. Maradona leapt with England keeper Peter Shilton to meet a misdirected clearance by Steve Hodge, and television replays showed clearly he punched the ball into the net. The goal was incredibly allowed to stand by Tunisian referee Ali Bin Nasser. Maradona later said: “(The goal was) a little with the head of Maradona, a little with the hand of God.” His second goal — an amazing individual effort ranked one of the greatest in finals history — helped the South Americans secure a 2-1 victory and on course to win a second World Cup.

Kuwait caused a storm in the group stages of the 1982 World Cup after Alain Giresse scored a goal to put France 3-1 ahead. The Kuwaitis maintained they had stopped play after hearing the referee’s whistle, which in fact came from the stands. The Kuwaiti FA president Sheikh Fahad Al Ahmed went onto the pitch to remonstrate with referee Miroslav Stupar, who subsequently rescinded his decision and disallowed the goal. The furious French still went on to win 4-1.

Chile goalkeeper Roberto Rojas was banned for life — and his nation for one World Cup — after an incident in the 1990 qualifier against Brazil. Chile were losing 1-0 and facing elimination when Rojas fell to the ground apparently having been hit by a firework thrown from the stands. The match was abandoned and Chile demanded automatic qualification. But video evidence later proved Rojas had not been hit by the firework, and had in fact cut himself with a razor blade he had hidden in his glove.

Fifty years on, debate still rages over whether Geoff Hurst’s second goal in the 1966 World Cup final actually crossed the line. Early in extra-time, Hurst hit a shot which hit the underside of the bar, bounced down and was cleared. Linesman Tofiq Bahramov declared the ball had crossed the line, and England went on to win the final 4-2. No amount of modern video technology has appeared capable of coming up with a definite answer as to whether Hurst’s goal should actually have been allowed or not.