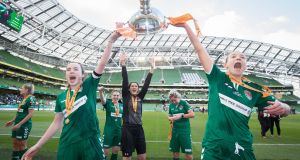 Cork City WFC are the 2017 Women’s FAI Cup winners after a 1-0 win over UCD Waves at the Aviva Stadium on Sunday.

In a game of few chances, UCD Waves began the better side with the majority of possession in the opening half hour. However, time and time again the final ball didn’t find its target for the Dublin side.

The breakthrough came in the 35th minute with a wonderful goal from Cork. Katie McCarthy picked up the ball in her own half, found Clare Shine with a sublime ball over the top. Brooke Dunne came out to narrow the angle but Shine brilliantly rounded the Waves keeper and slotted home from a tight angle.

UCD Waves’ best chance came with 10 minutes remaining in the game. Cork goalkeeper Amanda Budden’s clearance from the edge of her area landed at the feet of Catherine Cronin 40 yards from goal. The winger took a touch before firing a fantastic lob over the stranded Budden only for it to go inches past the Cork post.

That was to be the last chance of the game as Cork held on for a famous win thanks to player of the match Shine’s brilliant goal, one worthy of winning any cup final.