Age Hareide: ‘The Irish are easy to read but difficult to beat’

Danish coach not expecting anything new from Ireland in playoffs 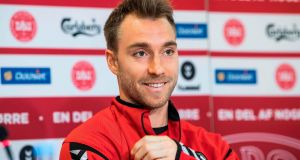 Age Hareide says he knows how Ireland will play in Saturday’s World Cup playoff at the Parken stadium in Copenhagen but suggests he is less certain of how to beat them with Martin O’Neill’s men having, he accepts, shown themselves to be resilient on their travels over the course of this campaign.

“From our point of view everybody is fit and ready to go,” said the Denmark coach this afternoon, “and it’s the same as I said earlier the week, the Irish are easy to read but difficult to beat. But we are prepared and we work in our own way at doing things and, playing at home in the Parken with the crowd behind us, we will have a good go at them.

“The Irish teams that I have played against have very good spirit,” he said. “They like to play together, to be together. I only have good memories. The game plan [of the current one] is easy to read, They don’t change a lot from game to game. You can see the same style of play. But we also see that they stick together, the way the team spirit is spread out through the team the way they work well together.”

Asked whether, given Ireland’s habit of picking up their best results on the road over the last year and a half, he might settle for a draw in the first leg, he suggested it depended on the actual score.

“As long as they don’t score goals,” he said. “A zero zero would be okay; then we would have 120 minutes in Dublin to score a goal. That increases the possibility to get the away goal with the extra 30 minutes.

Tottenham star Christian Eriksen said that the team is looking forward to the game and that he is not personally pushed about who Martin O’Neill chooses to deal with him.

“I’ve been man-marked a few times in my career so far,” he said. “I don’t know if Ireland will do it. I don’t really mind if they do. If they do then there will be more space for the other players that we have to show the quality that they possess and we can take advantage of that. But it’s Ireland’s decision and to me it doesn’t really matter.

“I think we will go out there and do our thing and, of course, they will play the way that they have in previous games, with a lot of people behind the ball. So we will have to play quick and open up the game.

“Of course if you have a team that wants to play and a team that doesn’t want to play then the game will be dragged out. For them nil-nil is probably a good result whereas we want to score goals and create chances . We will probably get fewer than we have in other games but we will look to create as many as we can.”

Eriksen said that, having been to the World Cup in South Africa and the European Championship two years later, he is anxious to make it to another major championship and hoping to make more of an impact if the team does qualify.

For Kasper Schmeichel, the hope is to get to a first with the Leicester City goalkeeper keen to make his debut at that level.

“I’ve never played in a major championship,” said the 31-year-old. “We’ve missed out on the last two totally. It’s no secret that it hasn’t been fun sitting at home watching it on television so that’s not something that I want to experience again.”