How a trip to South America triggered Northern Ireland’s rise 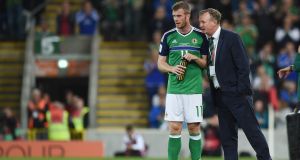 A 10-day tour of South America before the 2014 World Cup has been understandably overlooked in the story of Northern Ireland’s extraordinary rise under Michael O’Neill. To those who stood by the manager at his lowest ebb, however, it was the trip that changed the team’s mindset entirely. They would play the warmup act no more.

“In some respects that trip was the beginning of the new Northern Ireland,” reflects Patrick Nelson, the chief executive of the Irish Football Association, before Thursday’s World Cup play-off first leg against Switzerland in Belfast.

He is well-placed to judge. Nelson was part of the Northern Ireland contingent for friendly defeats by Uruguay in Montevideo and Chile in Valparaiso three years ago, when O’Neill’s team were invited to join the South Americans’ preparations for Brazil, despite finishing second from bottom of their qualifying group. Now, as one of the eight best runners-up in Europe, Northern Ireland are a play-off away from qualifying for consecutive tournaments for the first time in their history.

The manager’s meticulous attention to detail, defensive prowess, a small but selfless core of players and a formidable record at a redeveloped Windsor Park are well-established factors in the transformation. Leaving behind a small-nation mentality in South America was another, according to the IFA’s chief executive.

“We looked at it, Michael looked at it and the players looked at it and we all thought: ‘Wouldn’t it be fantastic if someone was the warmup for us going into one of these tournaments?’ You could see the excitement around the buildup to a World Cup and we just wanted to be on the other side of it.

“We were not far from holding our own against the two teams, both of who were ranked in the top 10 in the world at the time. We were level with Chile until the 80th minute and two late goals deflated us. Against Uruguay we lost by one goal and had a great chance to equalise in the last minute. That trip gave the entire squad the belief we could make the next step.”

Northern Ireland required a monumental leap in 2014, however. O’Neill’s first qualifying campaign could well have been his last without the patience and belief of the IFA board. His team took seven points from 10 matches, became the first side since 1972 to lose a World Cup qualifier in Luxembourg and at one stage, with O’Neill arriving from Shamrock Rovers in the midst of a 13-game winless run, dropped to a record low of 129 in the world rankings.

They will host Switzerland ranked 23rd in the world, higher than the United States, China, Turkey and Sweden: reward for O’Neill’s talent and the IFA’s decision to award their manager a new two-year contract in 2014, despite an inauspicious start.

“There was no question of us making a change after the first campaign because we could see Michael was generating potentially good results,” says Nelson, a former chief executive at Notts County and Macclesfield Town. “We were never really out of games in that first campaign and there is an interesting statistic to back that up. If the games had finished after 75 minutes we would have got double the points we ended up with. One of the things Michael needed to do before the European Championship qualifying campaign was instil belief in the players and he told them: ‘You can do it until the 75th minute of a game, so why not do it for 90?’ That made a difference. That is the sort of thinking and analysis we knew Michael had on his first day.

“What immediately came across is that he is a very deep thinker about the game. It might be a cliche but he is the most erudite manager I’ve ever worked with in my time in football. He really does think everything through. He is a great strategist and a brilliant communicator.

“I’ve seen him do one-to-one interviews with journalists and then speak to hundreds of business people at a conference. A few weeks ago he spoke to all of the technical directors and coach educators at the Uefa conference in Belfast, 55 countries in total. He can adjust his message to the audience. He has a certain kind of authority to get across exactly what he needs to say.

“When we interviewed Michael in the first place we agreed between us it was never going to be a two-year deal to fix where we were at the time. There had been a few campaigns were we had been disappointing in them or disappointed after them. A short-term change would not have been the solution. We knew Michael could make the difference from the first interview and that confidence has been borne out.”

Windsor Park will greet Switzerland with a wall of noise, 16,000 commissioned flags and a corridor lined with photographs of euphoric Northern Ireland supporters. It has developed a taste for the big occasion while O’Neill has maintained momentum with one of the smallest pools of talent in Europe. Last summer’s European Championship represented Northern Ireland’s first major tournament experience in 30 years but that would be surpassed, insists Nelson, by an appearance on the world stage for the first time since 1986.

“People often reflect a country through the status of their sports whether it’s a rugby World Cup, the best tennis player in the world or football,” he says. “There is a great deal of pride and intrinsic value that comes from success on the sporting field and this is the biggest field Northern Ireland can ever step on to. In rugby Ireland plays as a single country. This is one of the few sports were we get the opportunity to represent the country on a stage that is bigger than the country. Nothing matches the World Cup. For us to be back on that stage would be such a big message for the country.

“It is back in our history now, but still part of it, but for many years the global media had only negative stories about our country. It is 19 years since the Good Friday Agreement and when you are able to portray positive stories about our country – such as what seemed like the whole country going to France for the Euros and 10,000 fans singing for an hour after a game when you have just lost to the world champions [Germany]– then it portrays the best of Northern Ireland on a world stage. It is 32 years since we were last at a World Cup. I would think it is long overdue.” – Guardian service

1 ‘Magnificent’ Conor Connelly remembered after sudden death
2 Billy Joe Saunders apologises for video of 'advice' on how to hit women
3 Karen Robinson Walton: I am looking at him. I say ‘Benjamin, what have we done?’
4 A beautiful, happy accident - Moneyball is the best sports movie ever
5 TV View: Mícheál Ó Muircheartaigh helping us all keep the faith
Real news has value SUBSCRIBE
Crossword Get access to over 6,000 interactive crosswords