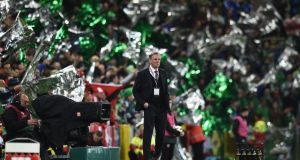 The Northern Irish camp are livid after losing Thursday’s first leg at Windsor Park 1-0, with handball awarded against Corry Evans for blocking Xherdan Shaqiri’s shot with what appeared to be either his back or the top of his arm.

No European team has ever progressed in the World Cup play-offs after losing the first leg at home but O’Neill hopes his team’s sense of injustice can be a catalyst for an historic success.

“We are a little bit of a victim and we have to use it in that way and we will see how the Swiss deal with it on their home territory,” he said.

“We have to deal with the decision and put it to the back of our minds and use it as a motivation.”

It was reminiscent of the Thierry Henry handball which robbed the Republic of Ireland in a play-off eight years earlier.

On that occasion the officials did not spot Henry clearly handling the ball in the build-up to William Gallas’ decisive strike, and the Football Association of Ireland was unsuccessful in its request to Fifa to have the match replayed.

Northern Ireland defender Jonny Evans claimed Hategan’s call in Belfast was “worse” because he interpreted something differently rather than failing to spot it.

However, it’s understood the Irish Football Association has no plans to follow the FAI’s route, not least because there is still a second leg to play.

They had sympathy from Keith Hackett, the former head of the Professional Game Match Officials Limited body, over both the penalty and the decision to only book Fabian Schar in the fifth minute.

O’Neill felt Schar should have been dismissed for a wild lunge on Leeds winger Stuart Dallas which forced him off with an injury that has made him doubtful for Sunday, and Hackett agreed.

“Rarely do you see a referee at international level make one glaring major error in a game, let alone two,” Hackett wrote on you-are-the-ref.com.

“The first was his reaction to a reckless challenge with excessive force which clearly endangered the safety of an opponent. Instead of producing a red card for Switzerland’s Fabian Schar, he showed weakness by pulling out of his pocket a yellow.”

On the penalty incident, Hackett said: “It was not a deliberate handball and, to the amazement of everyone, the biggest and most disappointing surprise of the night was the referee pointing to the penalty mark. Oh dear, at this level no referee wants to deliver such a massive error.”

Evans was booked for the handball, ruling him out of the second leg, and the IFA is unable to appeal that.

Both the caution and penalty decision may have been overturned had video assistance been available, as it will be for England’s friendly with Germany on Friday night.

“I spent three hours in a video conference with Fifa the other week on VAR (video assistant referee) and certainly when you see what happened you would certainly be an advocate of it,” O’Neill said.