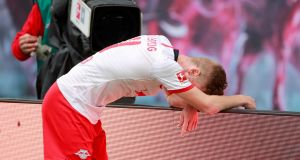 There are of course significant caveats to this red-shirted shadow army. “Linked with” is weak gruel at the best of times, shorthand for hopeful agents and arm’s-length bluff. And of course lockdown does funny things to all of us. Right now there is an empty space where football should be, tended by an industry that still needs to produce content.

But there is also an edge of reality buried beneath the mound of bodies, a shiver of anxiety as Liverpool’s final step towards the league title looms closer. This is driven in part by the question of what comes next. Something is happening here. But what exactly?

The most recent near-miss isn’t on that list. This is of course Timo Werner, who may or may not reach an agreement with Chelsea this week, but who has already become a very public Liverpool non-signing. It is an interesting move in itself, failure to recruit a player presented by Klopp as an act rather than an omission, as a positive choice, another part of a commercially-sound team-building strategy.

At £53m Werner was simply the right man in the wrong moment of total economic collapse. Such is the level of trust in Klopp and the club’s owners that this seems pretty reasonable. Footballing lore insists that great teams always build from a position of strength: a line that tends to overlook the wider truth that, weak or strong, in football you always need to be building, that even the finest teams exist in a state of constant disintegration.

It is this point that some supporters feel most keenly. Liverpool are champions of Europe. Liverpool spent the first six months of the season marching the rest of the field around the Premier League in a headlock. Liverpool have the most resourceful elite-level manager in the world.

And yet, there is also an acceptance that a team built on coaching and chemistry is in need of some urgent refreshing. Werner is a high-class player. His arrival would have reflected the success of recent methods, where large amounts have been spent, but on the right players in just the right spot.

There is still time. A high-class central defender and a versatile attacker (plenty on that shadow list) are still wanted. But teams are also fragile things. Time is passing. How often do these moments come around, when every element of an organisation aligns on the same course, when a wider generational success can be seen bedding into place?

And how often does such a moment coincide with a wider economic collapse and a four-month pause in the workings of everyday life? Liverpool have, above all, been terribly unlucky with timing.

This misfortune applies to the recruitment cycle. The significant period of evolution for the current team was between summer 2017 and summer 2018. During that year Alisson, Fabinho, Andy Robertson, Alex Oxlade-Chamberlain, Virgil van Dijk and Mohamed Salah all arrived, while Trent Alexander-Arnold emerged as a first-team player.

It has been a brilliant spell of team building. But by the time football returns it will be two years since Liverpool signed a significant player and 12 regular first-team squad members will be 28 or older. Alexander-Arnold is the only young player in the first XI. A period of renewal is due. Klopp knows this better than anyone. It was clearly coming this summer.

At which point: enter one global meltdown. The plans hatched to manage this will have been based on a previous version of reality, one in which it made sense to pay large amounts for a single high-class addition, and where commercial and TV income seemed guaranteed in perpetuity.

These are fragile margins, too. To reach this stage, to win the Champions League while also achieving record profits, is a wonderful achievement. But it doesn’t have to be like this. Success is a brittle thing. Imagine throwing a broken season plus total business model collapse into the workings of Manchester United 1992, Chelsea 2004 or Barcelona 2005. Success would still come. But earthquakes hardly help, not least ones that seem geared to attack specifically your own points of strength.

On the pitch the current Liverpool is built around extreme physicality and beautifully-grooved team chemistry, all of which have been interrupted. It is also a style built with the home crowd in mind, a way of playing that feeds on shared energy. Liverpool haven’t lost a significant domestic match at Anfield in over two years. This is all part of the design, formulated within parameters that have now disappeared. Same for everyone. But how many others had cracked it to this degree?

The commercial landscape has also changed. Liverpool became the best club team on the planet by playing the existing rules perfectly. Klopp and Fenway Sports Group have been kings of the FFP era, obeying the rules of engagement and exploiting their own resources better than anyone else at that level in Europe.

Well, say goodbye to all that. It is fairly clear that financial fair play will be given minimal policing from here as football looks to rake in every penny it can. A club like Chelsea is suddenly back in that position of power, with access to a bottomless set of pockets, and prepared to spend speculatively.

Not so far, and rightly so. Be true to thine own self: the most Klopp-era thing Liverpool could have done at a time of falling revenues, pay cuts and social division was to walk away from a £200,000-a-week new signing.

There will no doubt be money to spend. But success to date has arrived hand in hand with being able to read the room, and in this case the commercial management has once again followed its instincts. Who knows, in time Werner-to-Liverpool might turn out to be one of the great non-signings, an era-defining non-signing. For now Klopp and FSG have earned the time and the space to find out.