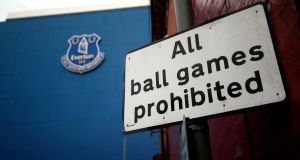 The Merseyside derby on June 21st will take place at Goodison Park rather than a neutral venue. Photograph: Martin Rickett/PA

The 236th Merseyside derby will take place at Goodison Park after all, after Liverpool City Council’s ground safety advisory group met on Wednesday morning and approved a safety certificate for the stadium. Anfield was also given the go-ahead, which means both Liverpool and Everton can player their remaining games on their own grounds without the need for neutral venues.

Liverpool could theoretically win their first title in 30 years at Everton on June 21st, which was why the national chief of football policing recommended a switch to a venue where supporters might not be quite as tempted to congregate and celebrate in defiance of physical-distancing rules.

As late as on Tuesday Southampton’s St Mary’s stadium was still being suggested as a possible venue, though once the Merseyside police and then the Liverpool council threw their weight behind keeping the game local most objections were overcome. Liverpool’s mayor Joe Anderson thanked both clubs for making it clear to supporters that their presence at of near the ground would not be welcome.

Councillor Wendy Simon, deputy mayor of Liverpool and chair of the CSAG, said: “We are satisfied that the considerable evidence provided by the government, Everton and Liverpool football clubs, public health colleagues and Merseyside Police will ensure that the outstanding fixtures for the Premier League season can be safely and securely played at both Goodison Park and Anfield.

“A lot of factors have been taken into consideration, especially the safety of the players, match officials and staff in attendance. We are confident the measures in place will allow the matches to be held behind closed doors without and detrimental impact. We would advise that everyone, wherever they may be watching these fixtures, strongly adhere to the guidance on social distancing.”

With regard to the derby, which will be broadcast free-to-air, Merseyside assistant chief constable Rob Carden said: “Working together with both teams, we want to ensure that everyone enjoys the game from the safety of their own home. In relation to crime and disorder we have no objections to any of the home fixtures being played at their respective grounds, the main issue of concern was always public health.

“It is not the role of the police to make operational decisions on the basis of public health, we have been guided by experts and the government. We are still in unprecedented times and there are strong concerns in Merseyside and the wider north-west due to the fact that the R-rate here is still higher than in the rest of the country. For that reason we would urge supporters to do the right thing – stay at home and keep your family, friends and neighbours safe.”

the CSAG meeting and welcomed the decision to keep the game on Merseyside. A statement said: “Building on the magnificent community work both sets of fans have done throughout this pandemic, we are confident supporters will respect safety advice and avoid visiting stadia. We fully understand the importance of lockdown as a measure to control Covid-19 and would encourage fans to stay away.” - Guardian