All in the Game: Brazilian pranks and identity theft 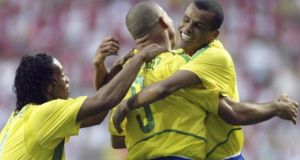 Edilson might have lived in the shadow of Ronaldinho, Ronaldo and Rivaldo on the pitch - but the Brazilian’s pranks were unrivalled. File photograph: Getty Images

He might have lived in the shadow of his more illustrious team-mates, notably the three Rs of Ronaldinho, Ronaldo and Rivaldo, but Edilson still finished his career with a World Cup winner’s medal in his collection. The now 48-year-old came on as a substitute in the 2002 final when Brazil beat Germany.

But in a chat with Goal.com, he conceded that his club career never quite reached the heights he believed his talent deserved, although his idea of a good prank didn’t always help. Like when he was with Vitoria in Brazil.

“The training ground had been robbed and I carried a gun at that time. When I arrived in my car I accelerated and it threw up a lot of smoke, the guys were all scared because they’d been robbed the day before. I opened the window, pulled out the gun and fired four shots. They all ran into the woods, the president into the kitchen.”

Amazingly, the president decided to dispense with Edilson’s services.

Shirt of the week? We’ll go with the one worn by Jonathan McDonald when he came on as a sub for Alajuelense in their Costa Rican league game against Saprissa. The name on the back of his shirt? Burger King.

Yes, it was a whopper of a marketing stunt, although you’d have thought ‘Big Mc’ would have been more appropriate. Fortunately he wasn’t booked after coming on, the referee would have felt a right eejit putting his name in his book.

The least smart person of the week was the Brazilian who engaged in a spot of identity theft to make a fraudulent application for the emergency social welfare payment of €105 that has been brought in to help Brazilians unable to work during lockdown. You’d wonder, though, how much thought was put in to the identity that was stolen.

Initially, the application was approved, but was then frozen and “placed under evaluation”, according to AFP, because it “failed to meet the requirements”.

What raised suspicion? The application was in the name of, eh, Neymar and included his date of birth and national ID number.

As the report concluded, “with his contract at PSG and estimated earnings this year of €84 million, Neymar does not qualify for the payment”. Well, no.

“It will be like being without the condiments to make a good salad. Eating a salad without oil, vinegar and salt is not the same” - Porto manager Sergio Conceicao as excited about the prospect of playing without crowds as he would be about eating an undressed lettuce leaf.

8,900: That’s how many pounds Borussia Dortmund’s Jadon Sancho has been fined for not wearing a mask while having his hair cut. As The Sun so expertly put it, ‘Bad Herr Day’.

- “He was nothing, a zero. I looked at him and thought: ‘How can you even play soccer?’ Neither give nor receive, slow, slow, slow, how are you going to play football at all?” Spurs old boy Roman Pavlyuchenko on his initial impressions of the young Harry Kane. The boy, he reckoned, wasn’t even a bit special.

- “Per is so tall, and he’s looking down at you trying to be intimidating but it’s also kind of friendly. Imagine like a really friendly Arnold Schwarzenegger or something. That’s Per.” Bayern Munich’s Serge Gnabry reflecting on his spell with Arsenal where Per Mertesacker, he said, was a major influence on his career. His Perminator, if you like.

- “I got a phone call from Louis and he said to me: ‘What the **** are you going to do in Scotland?’ He was good, I felt sincerity in his words.” Olivier Giroud on the time early in his career when he nearly joined Celtic before opting for Montpellier, their president, Louis Nicollin, proving, eh, rather persuasive.