MLS reiterate support for players kneeling during US anthem 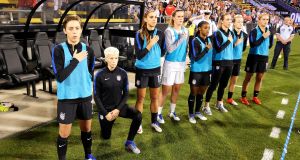 Megan Rapinoe takes the knee during the national anthem ahead of a game against Thailand in September 2016. Photograph: Jamie Sabau/Getty

Major League Soccer said on Tuesday it would make no changes to its longstanding policy of supporting peaceful protests by players or staff during the pre-game playing of the US national anthem.

Former San Francisco 49ers quarterback Colin Kaepernick knelt during the anthem in 2016 to call attention to racial inequality and police brutality and has not been signed by any National Football League (NFL) team since the end of that season.

The controversial issue has returned to the fore in the wake of the killing of George Floyd, a black man in Minneapolis who died after a white police officer kneeled on his neck for nearly nine minutes, prompting protests in the United States and beyond.

“Major League Soccer stands by the ideals of freedom of speech and the right to peaceful protest that are the hallmarks of the United States and Canada,” the professional North American league said in a statement.

“If players or staff decide to stand, kneel or otherwise exercise their right to peaceful protest during the playing of the national anthems before league games, we support them.”

The statement comes after NFL commissioner Roger Goodell last week said the league made a mistake not listening to players and encouraged them to speak out and peacefully protest.

It also comes on the same day that the United States Soccer Federation, which oversees the sport’s US national teams, was scheduled to meet to consider repealing a policy requiring national team players to stand during the national anthem.

The policy was put in place in 2017 after US women’s national team member Megan Rapinoe took a knee during the playing of the anthem prior to a match against Thailand in 2016.

Mike Tyson and Roy Jones Jr fight to a draw in Los Angeles 12:18
Limerick can count on the assurance that has eluded Galway at key moments 08:00
Once in a blue moon: Cavan’s overnight success 15 years in the making 08:00
Reshuffled France see off Italy to set up England final 23:04
Conor Gallagher gets West Brom off the mark as Blades blunted yet again 22:43

1 Jim McGuinness: There is a way to save championship and make it competitive
2 Once in a blue moon: Cavan’s overnight success 15 years in the making
3 Limerick can count on the assurance that has eluded Galway at key moments
4 Ireland’s clash against Georgia will be an important audition
5 Sordid murder of hurling brothers still resonates in south Galway
Real news has value SUBSCRIBE
Crossword Get access to over 6,000 interactive crosswords