‘Why do you need the money now?’: Schalke apologise for ticket refund questions 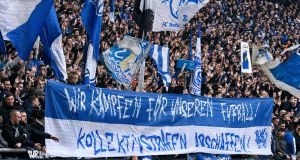 Schalke supporters were asked to give reasons and proof as to why they were asking for ticket refunds. Photo: Uwe Kraft/AFP via Getty Images

Schalke 04 on Thursday apologised for an insensitive and impersonal refund form after asking fans who had bought tickets to matches they could not attend due to the Covid-19 pandemic to explain why they needed their money back.

The German Bundesliga was suspended for more than two months due to the pandemic and resumed play in empty stadiums from May 16th to minimise the risk of infection.

Clubs have offered their fans refunds and coupons for their tickets and many season ticket holders in Germany have opted not to ask for their money back to support their club financially during lockdown.

Yet Schalke went a step further asking fans to explain their exact reasons for demanding a refund, such as financial hardship, and to submit supporting documentation.

“Why do you need the money now? Elaborate on your case of hardship and if possible submit respective documentation,” the letter to fans read.

This triggered an immediate outcry prompting Schalke to apologise.

“No one will need to hand in documents and of course no one will be ‘controlled’,” the club said in a statement.

“In the letter to fans... Schalke used impersonal and not very sensitive expressions. For that the club and employees of the service centre would like to apologise to all fans. We could and should have expressed it better.”

Apart from financial problems, Schalke are also in freefall on the pitch having won none of their last 11 matches to sit in 10th place in the Bundesliga.

Topley and Willey named in England squad to take on Ireland 15:06
Former Waterford boss Alan Reynolds joins Ireland Under-21 set-up 13:09
Chris Froome to join Dan Martin at Israel Start-Up Nation 12:51
When Clare’s hurlers climbed Everest and won Munster in 1995 12:15
Rafael Nadal: A mental giant who plays every point as though it’s his last 10:59