Only a half measure as Spanish football makes bizarre return 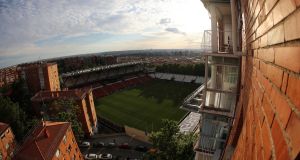 A aerial view of the La Liga second division match between Rayo Vallecano and Albacete at the Vallecas Stadium in Madrid. Photograph: Rodrigo Jimenez/EPA

Rayo Vallecano beat Albacete 1-0 on Wednesday as Spanish football returned in bizarre circumstances from its Covid-19 hiatus with the second half of a match that first kicked off six months ago but was suspended due to offensive chanting.

The second division encounter was the first Spanish football match to take place since March after all soccer was halted due to the pandemic.

Yet only 45 minutes were played and Albacete lined up with 10 players as midfielder Eddy Silvestre had been sent off when the first half of the match was staged in December.

That game, played at the Vallecas Stadium on December 15th, was abandoned at half-time as the home fans had accused Albacete forward Roman Zozulya of being a Nazi, the first time a Spanish football match had been called off due to offensive chanting.

Zozulya had little impact on the match, however, which was settled by a brilliant strike from Rayo’s Peruvian right back Luis Advincula, who found the net on the hour mark with a superb curling strike from outside the area.

Ukrainian forward Zozulya has had a long-running dispute with Rayo ever since he signed for the club in January 2017 but left after fans turned up to his first training session and accused him of belonging to far-right groups in his home country. Zozulya has repeatedly denied belonging to the far-right movement.

Even though fans could not enter the stadium due to safety reasons, Rayo’s hardcore supporters hung up a banner outside the ground bearing an offensive message about Zozulya.

A minute’s silence was held before kick-off in memory of the 27,000 people in Spain who have died from Covid-19, while flags displayed across the empty stands also honoured the victims, reading “We’ll never forget you” and “Always in our memory”.

Spain’s top-flight La Liga resumes on Thursday with the derby between Sevilla and Real Betis.