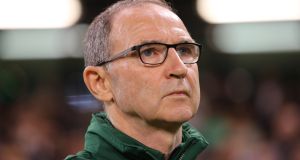 Martin O’Neill has written a seven-page submission to Donegal County Council objecting to the building of a youth football facility. Photograph: Ryan Byrne/Inpho

Former Republic of Ireland manager Martin O’Neill has lodged an objection against the development of a football pitch for children in Donegal.

Dunfanaghy Youths FC, who have been homeless for almost two years now, lodged a planning application for an ambitious development at Lurgabrack, Dunfanaghy in March.

The proposed development is to consist of a playing pitch, a training pitch, spectator stand, clubhouse and associated facilities.

“First, the environmental impact of erecting stadia in this area of scenic beauty must be recognised. Horn Head is renowned not just locally, not just in Donegal, but also throughout Ireland and would be adversely affected by this proposed development.”

O’Neill notes that the natural wildlife or the area “would be seriously affected by the proposals”.

“Access and safety will be compromised by any such stadium construction,” he adds.

Dunfanaghy Youths have been homeless since being served with a notice to leave the pitch at Kill, Dunfanaghy they had been playing on for over 25 years.

The club won the John Gorey Curran Cup in May 2018 and in December 2018, when they were operating without a home pitch, won the Donegal Youth League.

Dunfanaghy Youths FC caters for boys and girls up to Youth League (Under-18) level. In recent times they have been using the pitch at PCC Falcarragh for some home games and the community pitch in Creeslough for small-sided games and some training.

Finn Harps captain Mark Anthony McGinley is a product of the Dunfanaghy Youths conveyor belt, while several players have gone on to play in the Ulster Senior League. The club - who had over 130 players registered in 2019 - has said that this proposed development is their ‘one and only option’ to source a home.

O’Neill was a two-time European Cup winner with Nottingham Forest as a player and he managed Ireland from 2013-2018, a period that included Euro 2016.

O’Neill’s submissions, dated May 5th, include a seven-page document, in which he outlines his objections under a number of headings including: environmental concerns; contravention of development plan guidance; the site’s planning history; traffic and pedestrian access; and changing the character of Horn Head.

He wrote: “If permitted, the development would be in use on a daily basis. Long winter evenings would necessitate the use of floodlighting which will have direct impeach on wildlife and the nearby residents.

“The single file lane way upon which it is proposed the public and developers will access the stadium is the same access serving only five existing properties and it would certainly be unable to cope with what is being proposed.

“Serious practical problems for this very private area will arise; as it is likely the public would use the lane way as a turning and parking opportunity on match and training days.”

The Dunfanaghy Youths application was supported by letters from the FAI and the Donegal Schoolboys League.

Donegal County Council say a decision is due on July 7th.