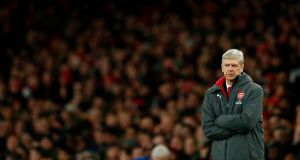 Arsene Wenger has been asked by the Football Association to provide observations about his comments made before and after Arsenal’s game with Chelsea, the governing body has announced.

Wenger complained about two penalty decisions given against the Gunners, the first awarded to West Brom on Sunday and the second given to Chelsea on Wednesday.

Both Premier League matches ended as draws and Wenger now has until 6pm on Tuesday to respond.

Wenger has said he intends to appeal the separate FA charge relating to his behaviour after last weekend’s 1-1 draw with West Brom, when Arsenal defender Calum Chambers was penalised by Mike Dean for a handball.

Arsenal then conceded another late penalty against Chelsea at the Emirates Stadium, as Eden Hazard went down following a challenge from Hector Bellerin. The game finished 2-2.

The FA’s latest enquiry relates in particular to Wenger appearing to suggest there may be a conspiracy against his team.

Wenger said before the game against Chelsea: “I must say what is more frustrating for me is that it happened many times this season – at Stoke, at Watford, at Manchester City, at West Brom. That is a concerning coincidence for me.”

On Dean’s decision to penalise Chambers, Wenger added: “He saw what he wanted to see and we have to deal with that.”

After the draw against Chelsea, Wenger told Sky Sports: “When opinions always go the same way it’s coincidence. Statistically it’s built on the fact that when it’s repeated it’s not coincidence.”

Roscommon keep up their bid for return to the top flight 17:59
Mayo left licking their wounds as Monaghan roll on 17:47
Corbett helps Laois edge over the line in Ennis 17:45
Real Madrid forward Eden Hazard faces lengthy spell out after breaking ankle 17:41
Ireland suffer Twickenham torture yet again as England dominate 17:37