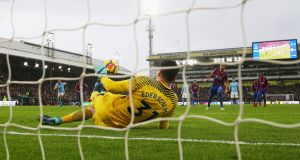 It is a measure of Manchester City’s divine attacking rhythm of the last few months that a goalless draw away from home against Roy Hodgson’s improving Crystal Palace will be hailed as a minor triumph for the Premier League title race, such as it is.

It was a fine afternoon for Palace, who produced a performance of energy and ambition to more than play their part in a thrilling goalless draw. They even managed to miss a penalty near the end, Ederson saving Luka Milivojevic’s poor kick with two minutes left on the clock. This would perhaps have been an injustice given the ease with which Wilfred Zaha tumbled like broken reed under Raheem Sterling’s challenge. More concerning for City fans was the sight of Kevin De Bruyne being carried off on a stretcher after Jason Puncheon’s crunching tackle towards the end of a bruising game for both teams.

This was a significant occasion in other ways as Manchester City came to Selhurst Park on the verge of eclipsing Pep Guardiola’s own personal best winning streak of 19 games racked up with Bayern Munich in the Bundesliga. It will perhaps be a point of pride for the Premier League that Palace were able to resist the outstanding English club team of the last few years with such verve, and perhaps others will learn from the boldness and energy of their approach.

New Year’s Eve is of course a time to remember old acquaintances, outlines dimmed by the mist of memory. For Manchester City this includes not just the rest of the Premier League field but those billed until quite recently as their closes rivals. A draw here still leaves them 14 points clear of last year’s champions, 15 points clear of Jose Mourinho’s Manchester United and 22 points clear of Spurs, title-chasers of the last two seasons. Spare a moment, ladies and gentlemen, to remember absent friends.

In the event the last day of the year did at least bring something new as Crystal Palace showed there is a way to play this multitalented, beautifully grooved City team that does not involve simply sitting back waiting for the blow to fall.

Selhurst Park had a raucous, clattery carnival air at kick off on a warm damp December lunchtime. And for the first half Palace pressed and pushed upfield with a contained fury that put the passivity of Newcastle United last weekend to shame.

Roy Hodgson set out his team with a back four and two holding midfielders and before kick-off Palace had retreated into a tight, 10-man huddle, like a rolling maul in rugby union, ominously perhaps given the pure attacking momentum in this City team.

But this was far from a holding operation for the home team as Palace set about the league leaders with some fury. The plan was clear enough, the midfield and full-backs funnelling early passes to Zaha in the hope of getting the Thornton Heath flyer in a foot race with Nicolás Otamendi, who may be many things – imposing obstacle, class A man-to-man wrestler – but dainty on his feet isn’t one of them,

For the first time in some time City looked pressed in those areas where they like to shift the direction of the play and wear an opponent down. David Silva’s ability to yawn his way through any press, no matter how frantically mustered, is not to be underestimated.

With eight minutes gone Palace had the first chance of the game from the simplest possible move. Wayne Hennessey punted the ball downfield. Eliaquim Mangala stumbled haring back towards Ederson. Christian Benteke scuffed his shot on the move and Mangala was able to get back to clear.

If City were slightly uncomfortable, by City being uncomfortable standards, they still looked like they might rip down the other end and score at any moment. With 16 minutes gone Scott Dann injured himself fouling De Bruyne as he surged past him just outside the Palace box and was carried off to be replaced by Martin Kelly. It looked a horrible twist of the knee. Dann was applauded off by fans of both teams.

Moments later Jesus collapsed by the touchline in some distress and wandered off in tears, to be replaced by Sergio Agüero. It was bruising stuff, but also a thrilling game of football the action condensed into small, intricate spaces, with every player on the pitch involved, from Zaha tacking back to his own goal-line to Patrick van Aanholt overlapping Bernardo Silva at the other end.

Agüero had his first moment in the game, shifting his feet in the tiniest of spaces and digging out a deflected shot that struck the right hand post with Wayne Hennessey beaten. And as Palace continued to press and ferret in Hodge-of-war fashion Guardiola could be seen for the first time on his touchline, the jewelled epaulettes of his executive bomber jacket winkling as he whirled his arms, demanding more, more movement, more passing, more of that familiar City stuff.

Zaha continued to attack with verve and craft on the left wing, skating away from Walker twice and staying a little wider than he has done at times, presumably to press City back in a favoured area. And at half-time Palace left the pitch to huge cheers with the score goalless.

Guardiola had marched off at speed, head bowed, brain whirring, faced with a problem to solve. True to form City’s ability to keep the ball began to tell after the break.

Palace had their moments. On 77 minutes Andros Townsend missed a gift of a chance to put them ahead, blasting wildly over from Zaha’s cross. Palace defended heroically at times, Kelly and James Tomkins producing some full body blocks. Agüero kept finding space, but never quite the finish.

With 88 minutes gone Zaha won Palace’s penalty, only for Ederson to preserve a Premier League unbeaten streak that stretches back to April.