Referee Emma Cleary happy to be at the centre of things 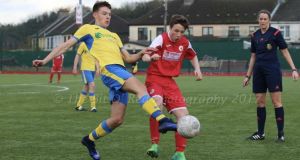 Referee Emma Cleary at work. “You have to keep up with the play, and fitness is a huge issue. This week it’s been four out of five days training”

Emma Cleary shrugs off the notion that she must have had some hard times on the football pitch: stories of the many ways in which referees are abused are common currency within the game but the 30-year-old physiotherapist from Manorhamilton seems perplexed.

“Maybe people are more polite in the west,” she says with a grin.

We meet over the Christmas on a day in which she has done a shift in a hospital back at home, then driven to Dublin, but her demeanour suggests this is pretty run of the mill. A lot of miles are covered between home and games in Sligo, Galway, Dublin and beyond, with the timings of the different domestic leagues ensuring it is a rear-round commitment.

Recently tournaments have started to take her much further afield, and in July of last year she worked with referee Paula Brady at a Champions League group stage in Montenegro. And she is hoping she is only getting started.

“I was the only woman in my beginners’ course but I stuck with it, and I’d definitely recommend it,” says Cleary, whose parents, Joe and Bernadette, helped to run the soccer club in Manorhamilton. She decided to give refereeing a go when her options for playing dried up as she emerged from the underage game and found that coaching did not quite fill the void.

“I did my coaching badges, up as far as my youth cert, and I ran a few teams, but I realised that what I really wanted was to be more directly involved in the games.”

Cleary started out overseeing small-sided children’s games, a stage she regards as having been vital to her development, and had just started doing the odd junior level men’s match when she left to study for some years in Manchester.

Since returning she has committed herself to progressing in the game, working in the various underage and women’s national leagues, doing more than one game almost every weekend, and often running the line rather than refereeing, depending on the level.

The roles, she says, present different challenges, but she enjoys both, and working as an assistant has brought opportunities to work abroad.

“I love being in the middle of things. But I like being on the line as well. It’s a different ball-game. It’s challenging – you’re looking for different things. Some people absolutely love that role. They focus on it; they like the offside and they get very good at it.”

Cleary performed it at the 2016 women’s FAI Cup final, one of the highlights of her career to date, and is grateful for the experience as it allows her to work in competitions like the men’s under-19s National League where the pace and intensity of the play presents a particular challenge.

The standard in the women’s senior league is also improving season by season, and she enjoys the games she does in it, often in Galway. Yet for a part of the year her bread and butter is still the Sligo-Leitrim junior men’s league where she is usually by herself, no assistants, and so has to work harder to ensure she is in a position to make a call she can stand over.

“You have to keep up with the play, and fitness is a huge issue. This week it’s been four out of five days training; whether it’s the gym or a spin class or a little bit of running on the tracks.

“Like anyone you want to be fair, and you want to do the best you can. You kick yourself if you have a doubt about a decision afterwards but you are out there, caught in that split second, and so for me being fit and being up with play is key. You have to give yourself the best chance to see it in the split second, to be close but not too close, and then to make your call and move on.”

A poor game can, she admits, be more challenging because of the difficulty there is maintaining concentration when not much is happening for long periods. However, she laughs at the notion that that is directly linked to the level of a game, recalling a recent junior men’s game in which there were goals galore at both ends and a handful of penalty calls to be made. “There was barely a dull moment,” she says.

She enjoys it all but is ambitious to push on, and hopes to get into the FAI’s School of Excellence over the coming months, to embark on a two-year programme that would help her graduate to League of Ireland level and, ultimately, perhaps to obtain her Fifa badge.

“When I was starting out I really wasn’t aware of the opportunities that were there. I was looking at working at the same sort of levels I’d been coaching at. I was happy with that, but you need to develop and I got that opportunity. Work are good to me and a lot of my colleagues are involved in sport too so we help each other out. Down the line I can get better tournaments, do the bigger games. Like the players, I want to be involved at the highest possible level.”

Of Ireland’s 1,400 registered referees there are just 35-40 women actively overseeing games, something the FAI is working hard to address, according to Declan Hanney, a former League of Ireland match official who is spearheading the association’s attempt to increase numbers.

“It’s a very small number,” he acknowledges, “but like Fifa and Uefa we are trying to improve the situation. Women’s football is one of the real growth areas in the game. So far that increased participation hasn’t been met with a corresponding increase in refereeing numbers, but we are working hard to change things, to recruit new female referees, and to provide better, more tailored support to those who do qualify and start out in the role.”

All referees in Ireland are paid, with the amounts varying according to the level of the games. Yet even at underage level, the role can provide a source of income for students or additional cash for those already in work while incentivising a decent level of fitness.

At a time when the number of girls starting out in the game is increasingly hugely, there is significant potential to progress through the ranks if someone starting out now is committed.

“There are a lot more girls’ and women’s matches at all levels these days, and ideally you’d like every one of them to be refereed by a woman,” says Hanney. “We are a long way from that here at the moment, but we would love to see a big increase in numbers.”

At the top women officials now oversee pretty much all of the games in senior female international tournaments, and Bibliana Steinhaus, a German police officer, became the first woman to referee a Bundesliga game a few weeks before Christmas.

“Almost every competition there is for men is mirrored by one for women, so there are great opportunities to progress and move up through the levels if you are good enough. It is a good time to get involved,”says Hanney.”

The association is running a beginners’ course at its headquarters in Abbotstown over the weekend of January 20th and 21st. Details of the course are available via the link at: https://tinyurl.com/ycxnsc3p The cost of participation is €100.