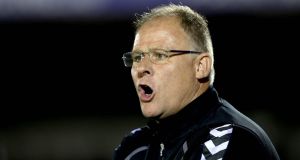 Neil McDonald has left Limerick FC in order to take up the position of assistant manager at Scunthorpe United with the club currently battling to win promotion to the Championship.

Limerick have only just started preseason training but the club says that it has “reluctantly accepted,” McDonald’s decision to depart after receiving an official approach from the League One outfit and talking to the Englishman about what he wanted to do.

McDonald will work alongside Graham Alexander at the club having previously known the 46-year-old from their time at Preston where the now Scunthorpe boss was a player and McDonald a youth team coach.

After spells in charge of Carlisle, Blackburn and Blackpool, he took over as manager at Limerick last May with the club struggling after a poor start to the season and oversaw a generally solid conclusion to the campaign, with the team securing some important wins and draws against relegation rivals and beating Cork City in September on the way to a seventh place finish, five points clear of the relegation zone.

They lost to John Caulfield’s side in the semi-finals of the FAI Cup but it was the first time in almost a quarter of a century that the club had reached that stage of the competition.

His assistant, Eric Kinder, is taking charge of the first team for the moment with the club saying they will weigh up their options before making a decision about the longer term. The new Premier Division season is scheduled to start on February 17th.

“The club and myself are naturally disappointed to be losing Neil at this time,” said club chairman Pat O’Sulivan in a statement. “However, when an opportunity like this is presented to your manager, where there is potential for him to be in the English Championship next season, Limerick FC is more than happy to fully back Neil and support him in taking up this position.

“It is also a compliment to Limerick FC that even though Neil has only been with us a short time, that his work has been rewarded with this very positive opportunity in his career. We thank Neil for his contribution to Limerick football in his time here.”

McDonald said that he had had “a fantastic time at Limerick even though it was a short period. I came to do a specific job; to help the club maintain its Premier status, to thin the squad out as it was top-heavy and to give the young players a chance - I’d like to think that I achieved all three.

“Limerick will always be my club in Ireland; I will watch them every chance I get and hope that they do very well, which I’m sure they will. I had a great time and I wish the club the best of luck.”

It is unclear at this stage whether Scunthorpe, who are fourth in League One - seven points off top spot and very much in contention for automatic promotion - have had to pay compensation to secure the release of McDonald who is expected to take up his new position with immediate effect. The club, which this week sold Irish striker Paddy Madden to Fleetwood Town for a fee believed to have been in the region of €170,000, are out of the FA Cup and have no league game until Saturday week’s visit to Portsmouth.