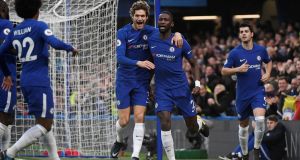 Willian scored one and set up two more as Chelsea cranked up the pressure on Mark Hughes with a thumping 5-0 win over Stoke.

Chelsea were three up at half-time as a sensational Danny Drinkwater volley came between goals from Antonio Rudiger and Pedro, both laid on by the brilliant Willian.

Willian then turned scorer in the second half by earning a penalty and then converting it before substitute Davide Zappacosta added a fifth late on.

Stoke’s win over West Brom last week eased the scrutiny building up on Hughes but his side have now won only twice in 11 matches. Their game at home to Newcastle on Monday now looks all the more important.

Their afternoon here might have been even more punishing had Eden Hazard not been rested, the Belgian left on the bench presumably with next week’s trip to Arsenal in mind.

But still, Chelsea were ahead within three minutes and in the simplest of fashions. Willian whipped a free-kick from to the back post where Rudiger rose high to nod home his fourth goal of the season.

Hughes had barely finished shaking his head before Chelsea doubled their lead as Pedro’s cross spilled out to Drinkwater on the edge of the box, where the midfielder took one touch before sending a dipping volley into the top right-hand corner.

Chelsea were rampant and Alvaro Morata should have made it three when he was freed by the busy Willian but Jack Butland did well to save one-on-one.

Morata’s miss seemed to matter little given the frequency of Chelsea’s chances and so it proved in the 23rd minute as Willian, again involved, supplied Pedro, who cushioned the ball on his back foot to avoid Josh Tymon before whipping it past Butland and into the bottom corner.

Mame Biram Diouf had the ball in the net for Stoke but he was adjudged to have controlled with his arm while Morata spurned another chance in behind, despite being generously deemed onside.

Stoke improved at the start of the second half and Saido Berahino could have ended his 22-month goal drought after nipping in behind Gary Cahill, but he shot straight at Thibaut Courtois.

The match drifted as Chelsea dictated possession without needing to over-exert but with 17 minutes left Willian finally got the goal he deserved. The Brazilian was chasing in the box and after winning the ball back was scythed down by Geoff Cameron. Willian slotted the penalty down the middle.

There was still time for Zappacosta, on off the bench, to add a fifth with a drive from distance. He capitalised on a poor Tymon header to round off an emphatic win.